Claims Come In At A New Low for the Pandemic

It took almost a year, but seasonally adjusted initial jobless claims have finally moved back below their pre-pandemic record level of 695K set in October 1982.  At the lowest level in a year, this week’s print came in below expectations of 730K at 684K. That was a 97K decrease from last week’s upwardly revised level of 781K and the largest week over week decline since the week of February 19th when claims fell by just 1K more.  We would also note that in this week’s release the BLS announced this will be the last week before revisions to the seasonal factors are made meaning next week the series will likely look slightly different as a result of those revisions. 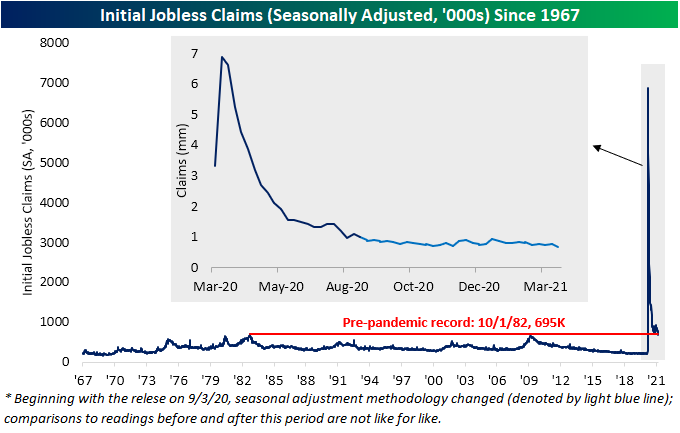 On a non-seasonally adjusted basis, claims likewise improved dramatically. Regular state initial claims fell by just over 100K to 656.8K this week.  Not only is that the lowest level for regular state claims in a year, but it was also the third-lowest reading on record for the Pandemic Unemployment Assistance (PUA) Program.  The only lower weekly readings in PUA claims occurred in the very first week that they were introduced (April 17th, 2020) and the first week of 2021 when there were some lapses due to the signing of the spending bill. On a combined basis, total initial jobless claims between the two programs fell back below 1 million for the first time of the pandemic. As for the individual states that drove those declines, California, Illinois, and Ohio (which is an unwind of some very elevated levels for the state recently) saw some of the largest declines across both regular state and PUA programs. In regards to just the PUA programs, Indiana and Oregon also were large contributors to that decline. 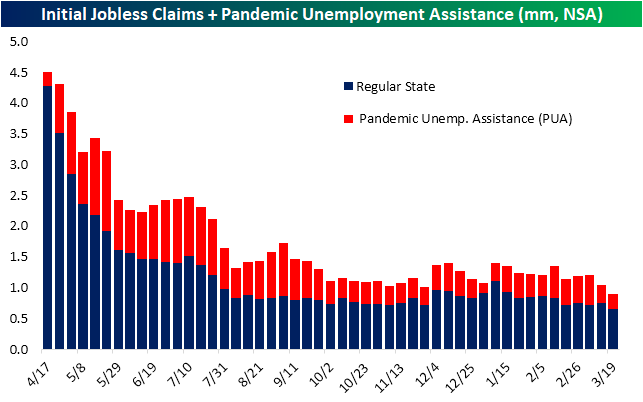 Continuing claims are lagged one week to initial claims so the most recent print for the week of March 12th would not reflect that big drop in the most recent initial claims data. Nonetheless, seasonally adjusted continuing claims have extended the declines that have consistently come over the past several months. In fact, of the past half-year (26 weeks), there have only been two times that the continuing jobless claims were not lower week over week. This week’s decline marked a tenth consecutive week that claims were lower.  Falling to 3.87 million, the current reading is the lowest of the pandemic and is now “only” about 2 million above levels from prior to the start of the pandemic. 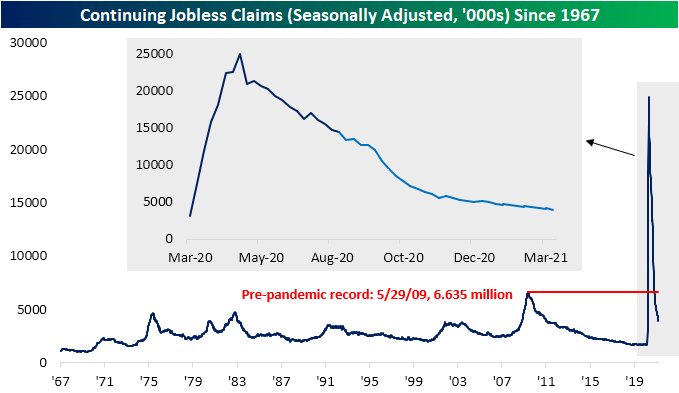 Including all auxiliary programs adds an additional week’s lag to the data meaning the most recent data as of the first week of March would again not reflect the big drop in initial claims this week. As of the most recent data for the first week of March, total claims across all programs rose slightly to 18.99 million from 18.253 million at the end of February.  That continues to be a somewhat elevated reading relative to the past few months though the recent drops in initial claims could mean that there is certainly potential for improvement on the horizon.

Pandemic Emergency Unemployment Compensation (PEUC) claims were the biggest contributor to that uptick as claims from that program rose 734.69K. While this data predated it, the signing of the American Rescue Plan Act extended this federal program through September after it was supposed to end in mid-March. This program in particular extends benefits once they have expired. That means the increase in continuing claims comes from people who have been long-term unemployed. In fact, of all continuing claims, those from the PEUC program accounted for 29.2% which is a new high for the pandemic. Combined with other extension-type programs like Extended Benefits, that share is also at a new high of almost 35% of all claims.  Click here to view Bespoke’s premium membership options for our best research available. 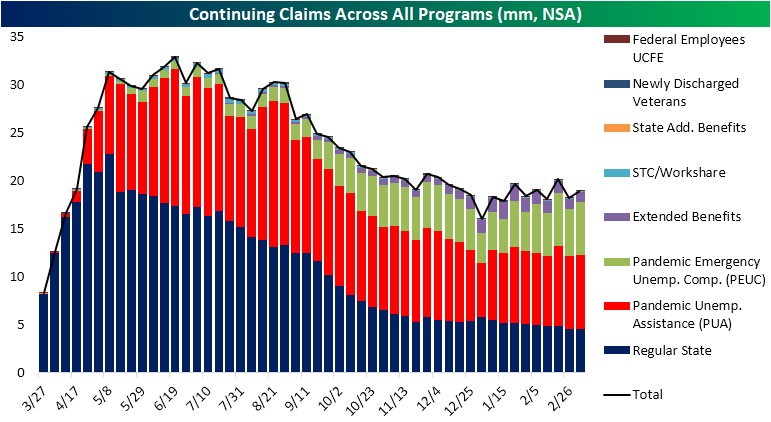 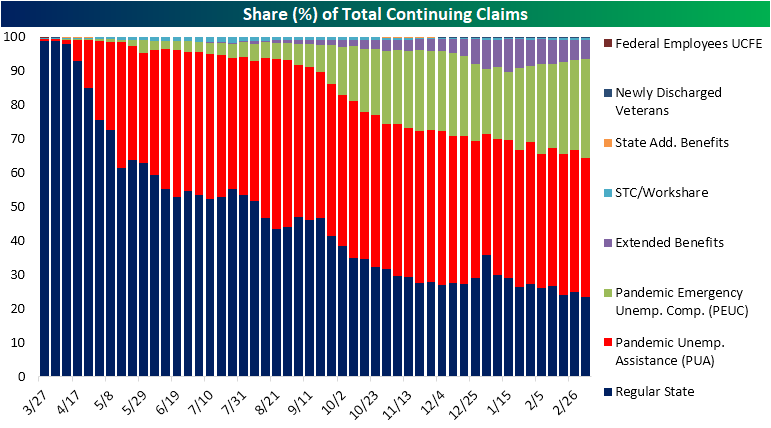