Claims Breathe A Sigh of Relief

Initial jobless claims have been on the rise over the past couple of months with last week’s original reading of 965K marking the highest level in claims since August.  While claims remain well above where they have been over the past several months, there was a significant improvement this week.  Not only was last week’s number revised down to 926K, but claims for the current week also dropped down to 900K instead of the forecasted reading of 935K. 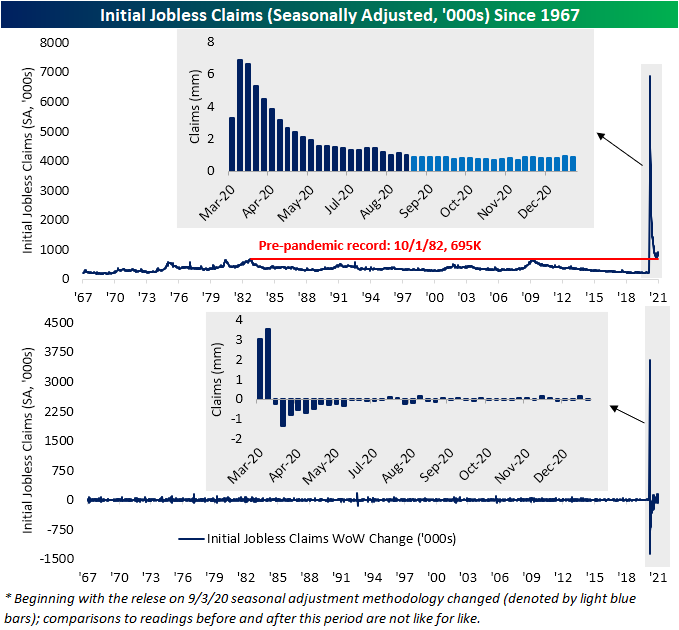 That improvement was echoed in the non-seasonally adjusted number which fell to 960.7K after rising back above 1 million last week. Again, although that is an improvement, the level of claims still remains at an elevated level relative to the past several months. 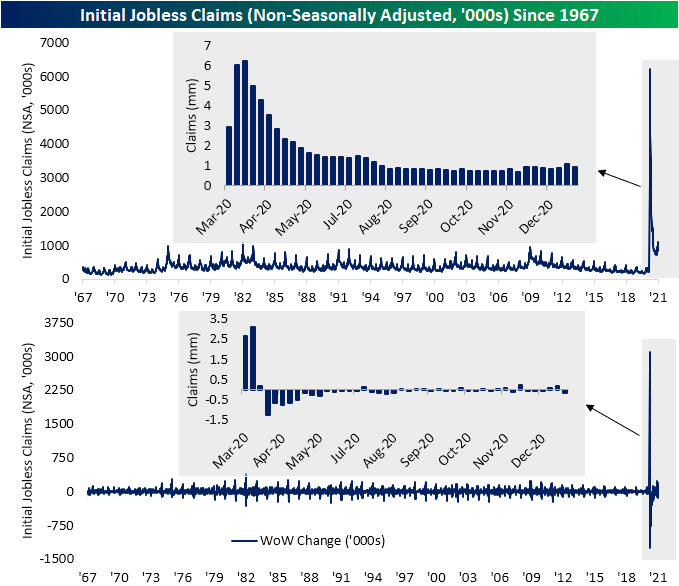 Additionally, looking at seasonality it should come as absolutely no surprise that unadjusted claims were lower week over week. As shown in the chart below, since the data begins in 1967 there has not been a single year in which the current week of the year (3rd) did not see claims move lower. 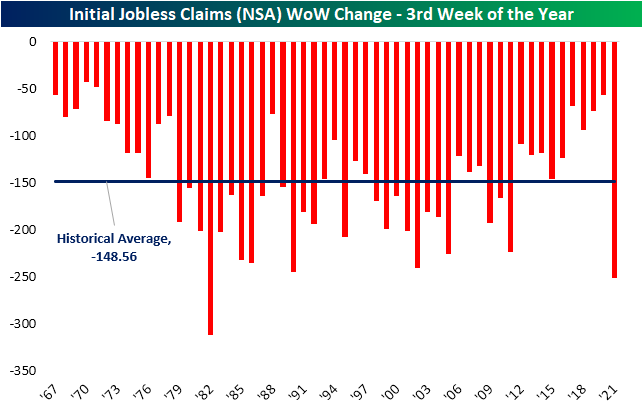 Factoring in other programs, namely Pandemic Unemployment Assistance (PUA), the improvement was much less impressive.  Total claims did fall but only from 1.397 million down to 1.384 million. That means a large uptick in PUA claims made up the difference for the drop in regular state claims. PUA claims rose from 284.9K last week to 423.73K this week. That was the highest reading in PUA claims since the week of December 11th. As we have noted in recent weeks, there have been some irregularities in the reporting of PUA claims on a state-by-state basis likely as a result of the timing of the signing of the recent spending bill. That larger uptick this week could be some catchup from lapses in the past few weeks. 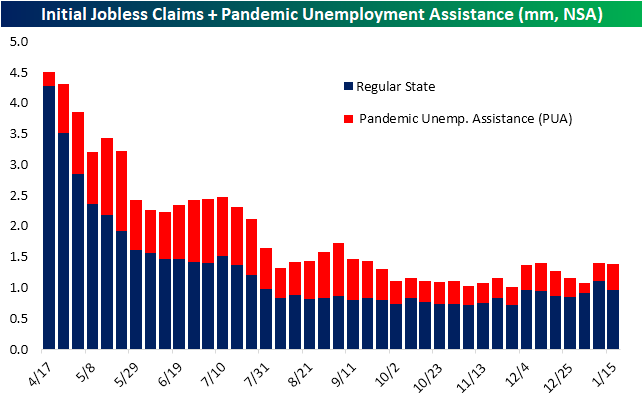 Lagged one week to initial jobless claims, continuing claims likewise made a move lower that exceeded expectations in the most recent week.  The previous week’s number was revised down to 5.181 million from 5.271 million.  This week, claims were expected to tick higher up to 5.3 million. Instead, claims dropped down to 5.054 million; a new low for the pandemic. 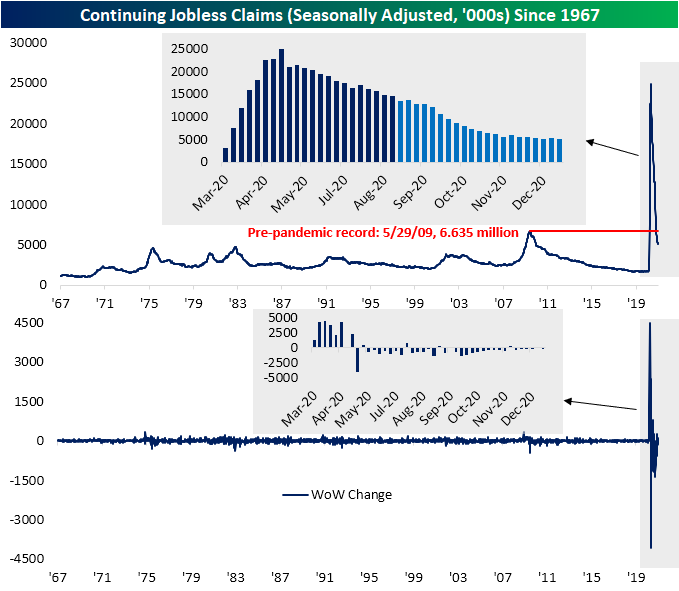 The most recent week’s data available for continuing claims across all programs is for the first week of 2021.  To start off 2021, total claims across all programs dropped sharply from 18.442 million down to 16.028 million.  Taking a closer look at that week, regular state claims had risen 384.7K which was offset by big declines in PUA and PEUC programs, each of which fell by well over 1 million. While at first glance that may seem like a major improvement, we would note that there likely is a bit more nuance in the decline.  More likely, that decline had to do with a mix of issues with reporting around the holidays and the timing of the spending bill which had extended these programs originally slated to expire at the end of 2020.  Click here to view Bespoke’s premium membership options for our best research available. 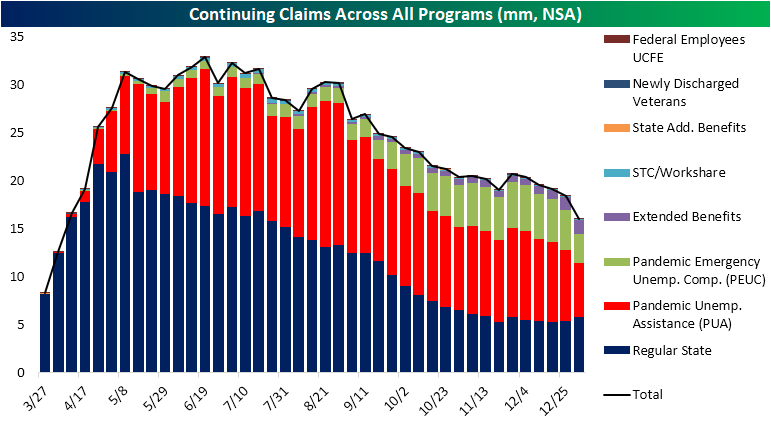 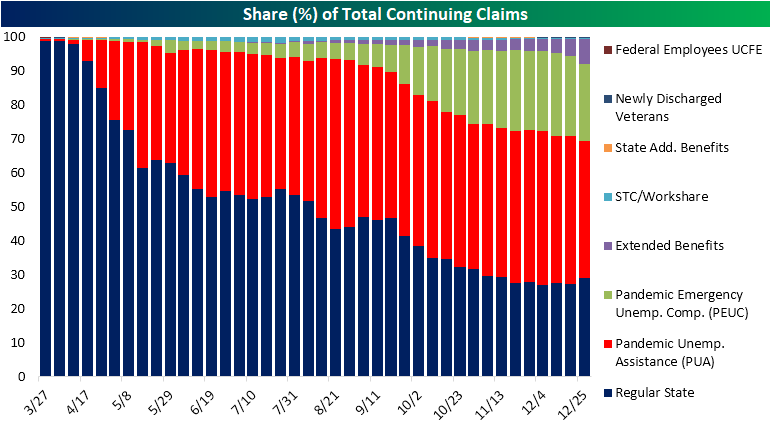