Citi’s US Economic Surprise Index at an All-Time High

Over the past few months, we’ve seen record drops and now record bounces for many of the most widely followed economic indicators.  The Citi Economic Surprise indices, which track how economic data is coming in relative to forecasts, have been a prime example of the moves in economic data.  Back at the end of April, the index for the US had fallen to a record low of -144.6, but that has since turned around.  Even before the addition of today’s blockbuster US retail sales report, the Citi Economic Surprise index had reached a new all-time high yesterday.  With a further boost from today’s releases, the all-time high is now even higher.  That means that economic data in the United States has been coming in far stronger than economists have had penciled in.

While the US has seen big beats for the country’s economic data, the same cannot be said for the broader world.  The global index (which would include the US) is at a much more modest level in just the 42nd percentile of all readings.  Although it was briefly positive one week ago, the global index is not even positive. Negative readings indicate that more indicators from around the globe are still releasing at levels worse than forecast. Granted, that is still improved from April and May when the index was at some of its lowest levels since the Financial Crisis. 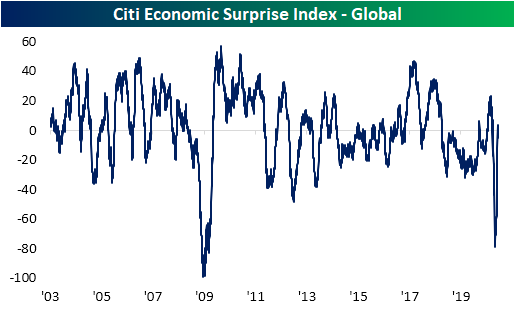 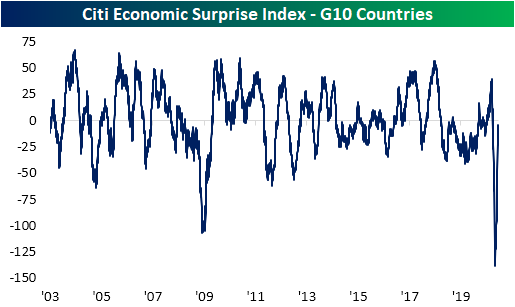 Taking another look at the developed world, more specifically the Eurozone, there has not been much of a rebound at all.  The Citi Eurozone surprise index is currently around -200 compared to a low of -304.6 on May 11th. Despite the nearly 100-point increase over the past month, it is still in the bottom 1% of all readings since 2003. 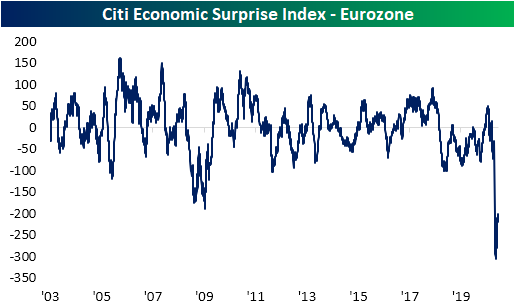 Switching over to Emerging Markets, there was never an outright collapse in the surprise index as was seen in other areas of the world. In fact, the index had been sitting in negative territory for much of the past couple of years, but the past several weeks have actually seen fairly consistent positive readings.  But the emerging markets index has been falling back towards negative territory so far in June. Click here to view Bespoke’s premium membership options for our best research available. 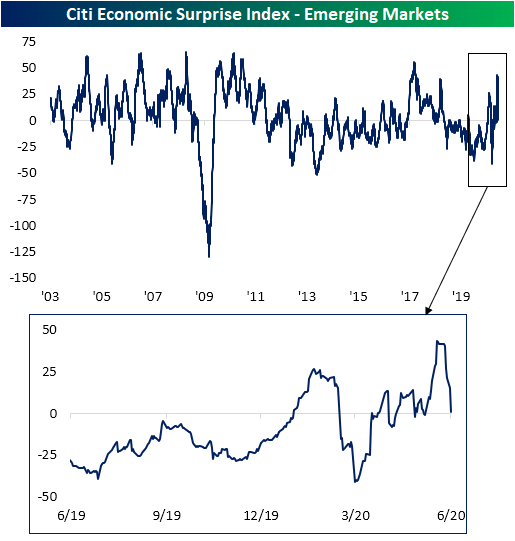