It is a boring start to the week with nothing on the docket for earnings, Fed speakers, or economic data.  With regards to the latter, the slate will pick up tomorrow with several US releases including retail sales, PPI, industrial production, and more.  Expectations for tomorrow’s releases are a bit mixed relative to the prior readings in each indicator, but overall, recent US data has been beating expectations at a healthy rate.  The charts below show the Citi Economic Surprise indices for a variety of global regions and the US.  Positive readings in these indices indicate economic data is coming in above forecasts, and vice versa for negative readings.  Additionally, higher positive or negative readings would mean that economic data is exceeding or coming up short of those forecasts by a wider margin.

Currently, the US index is well off record levels from the past year, but it has bounced since the start of June.  The index has risen 42.7 points in the ten days from the end of May to last Friday.  That move stands in the top 2% of all 10-day changes since the index began in 2003. That also comes not even a full month after the index saw its first negative reading in a year.  While the negative reading was far from anything extreme, the sharp rebound has been impressive, leaving the index at a historically healthy level in the 83rd percentile.

The US is not alone in having seen a rebound.  Although it is similarly off the peak from last summer and generally trending lower since then, the global index has consistently sat at the high end of its historical range over the past year.  The current reading is still in the top 1% of all periods, and the move higher over the past ten days is again dramatic ranking in the top 5% of ten-day changes in the index’s history. While the jump in the US index has likely played at least some part in this, other regions around the world are also pulling weight having seen just as, if not more, significant moves.  Sticking with a look at the move over the past ten days, the gains for the indices covering APAC and Central/Eastern Europe, the Middle East, and Africa all rank in the 98th percentile while the move in the index tracking Latin American countries ranks in the top decile. Each of these indices now sits in the top 1% or 2% of their historical ranges. One outlier region not contributing to the pickup in the global index has been Europe.  While the Eurozone index is far from weak, it has not seen much of a move higher recently as other regions have. 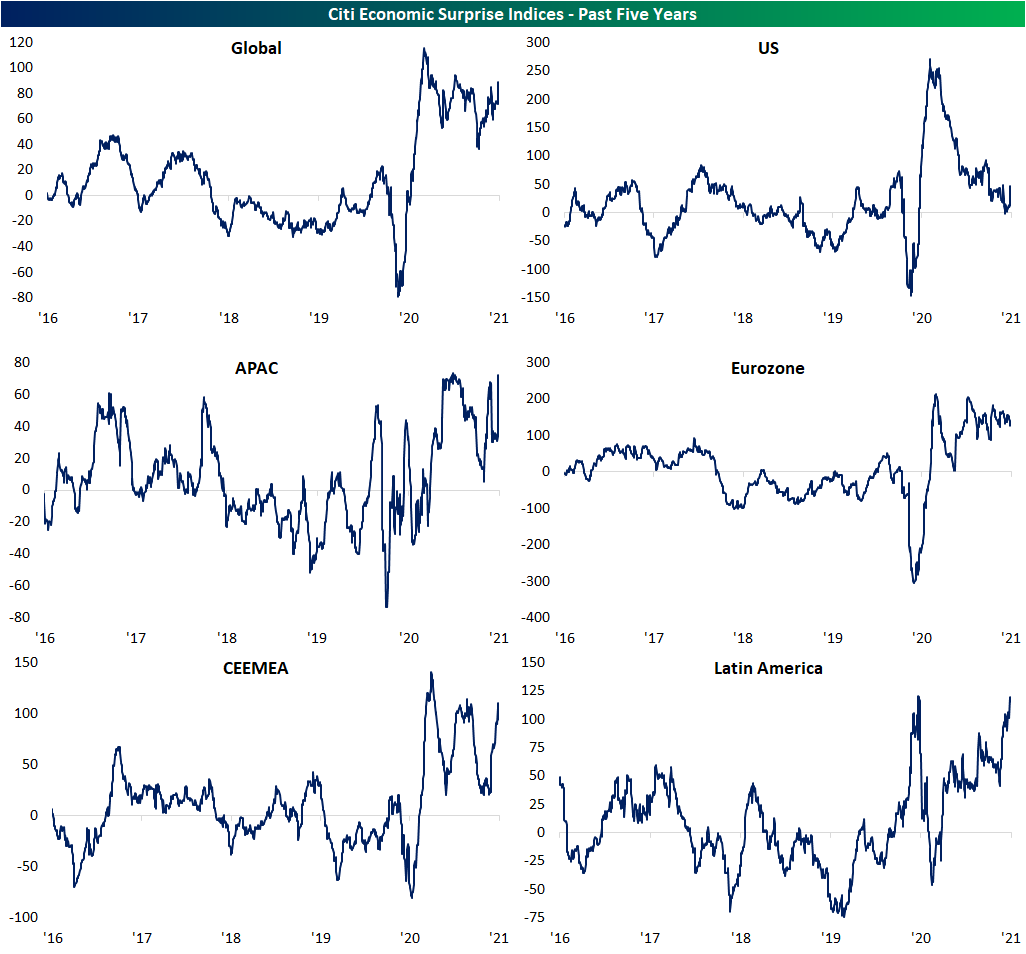 Likely thanks to the weakness in Eurozone countries, a similar dichotomy can be seen comparing the indices for major developed economies (the G10 members) and emerging market countries.  While the index tracking major economies has simply held up at healthy levels, the emerging markets index has leaped to new record highs, breaking well above the previous records set earlier in the pandemic. BRIC countries in particular are some to thank for that sharp move higher as the index has seen one of its largest short-term moves on record.  Click here to view Bespoke’s premium membership options. 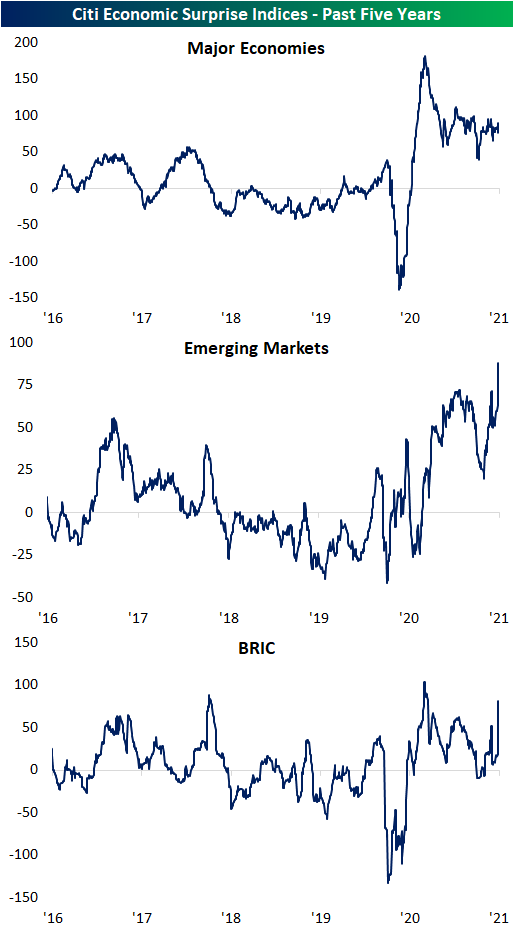