After yesterday’s close, Cintas (CTAS) reported an earnings triple play (EPS and revenue beats along with raised guidance) posting record revenues and EPS.  Given the nature of its business, which provides a variety of business services including uniform, cleaning, and first aid product distribution, CTAS should provide a reasonable gauge on the US business environment and more specifically, employment.  With concerns rising over whether or not a recession is right around the corner, it would be a bit of a head-scratcher to see a company like CTAS post such strong results and trade close to record highs if the economy were in fact plunging into recession. 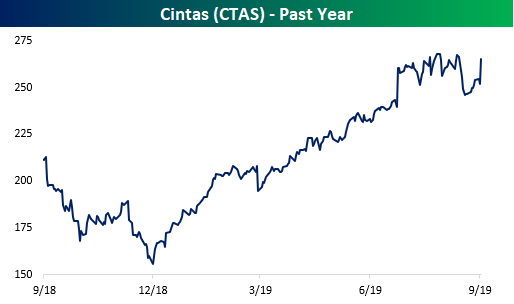 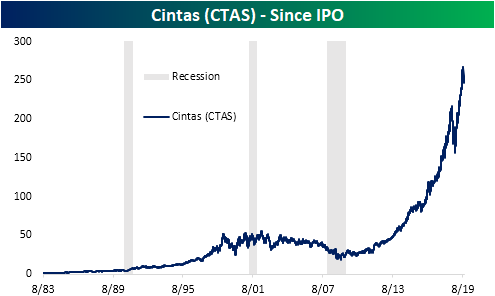 Each chart below shows the performance of CTAS in the year before, during, and year after each of the three prior recessions for which CTAS was a public company.  Judging from the last three recessions, the stock’s performance has had a mixed track record of anticipating downturns.

In 1990, CTAS didn’t do a very good job anticipating the recession as it peaked right before the recession started.  Once the contraction began, though, CTAS bottomed and anticipated the turn in the economy well before it began. While CTAS wasn’t a very good leading indicator of the 1990 recession, keep in mind that that slowdown was brought on by an oil price shock (after Iraq invaded Kuwait) that would be impossible to anticipate.

The performance of CTAS leading up to and after the last recession was probably the best example of it anticipating a recession and the subsequent turn as it was already weak well in advance of the recession’s start and bottomed (along with the rest of the market) in March 2009- over three months before the economy turned.

Judging by these three specific periods, CTAS has not been the best predictor of a looming recession in the past, but one thing it hasn’t done in the past is rally leading up to a recession and then continue to rally once the recession starts.  Therefore, as CTAS continues to build on today’s post-earnings gain, it will be hard to argue that the economy is in the early stages of a recession. Start a two-week free trial to Bespoke Institutional to access our interactive economic indicators monitor and much more. 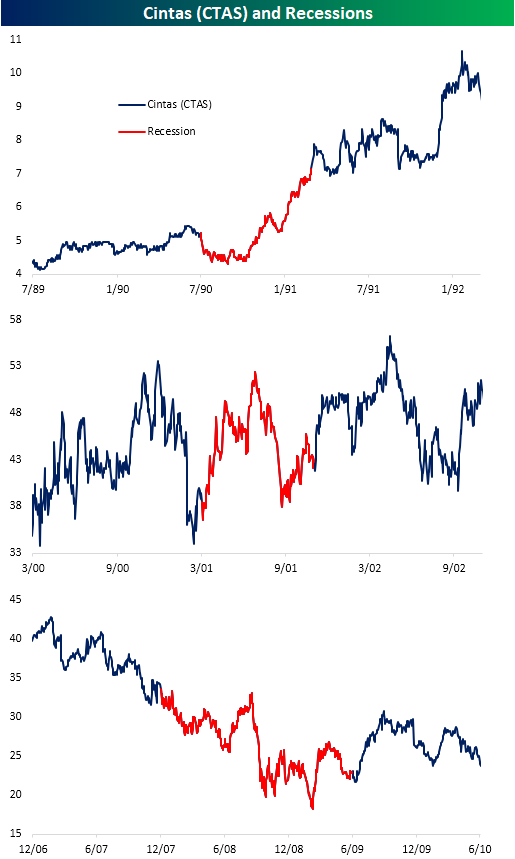