Given the market cap weighted methodology of the index, the S&P 500 receives outsized impacts from the largest stocks making mega caps like Apple (AAPL) or Amazon (AMZN) a critical group to look at.  The FANG+ index which tracks some of the largest and most highly traded tech giants helps to provide a glimpse at the performance of said mega caps.  On a relative basis versus the S&P 500, the NYSE’s FANG+ index has been trending lower since last November around the time of the peak of the growth/Tech trade, but it peaked even further back in early 2021.  The relative strength line then hit a low in the late spring of this year and has been on the move higher alongside the S&P 500 ever since. In the past few weeks, however, the line has begun to roll over moving in line with that downtrend.

One important factor to note about the FANG+ Index is the membership of two Chinese mega-cap stocks: Baidu (BIDU) and Alibaba (BABA).  Given the past year and a half’s news slate regarding the potential delisting of Chinese stocks on US equity markets, these two names are in a different boat than the rest of the FANG+ cohort, and that has been reflected in price action. Put differently, the FANG+ index is a good, but far from perfect, proxy for mega caps because of the inclusion of Chinese names which face exogenous risks that do not apply to US-based mega-caps. Excluding those two, the FANG+ index’s relative strength line versus the S&P 500 peaked far later in late 2021, and the recent turn lower has been a more concrete rejection of a breakout from the recent downtrend. 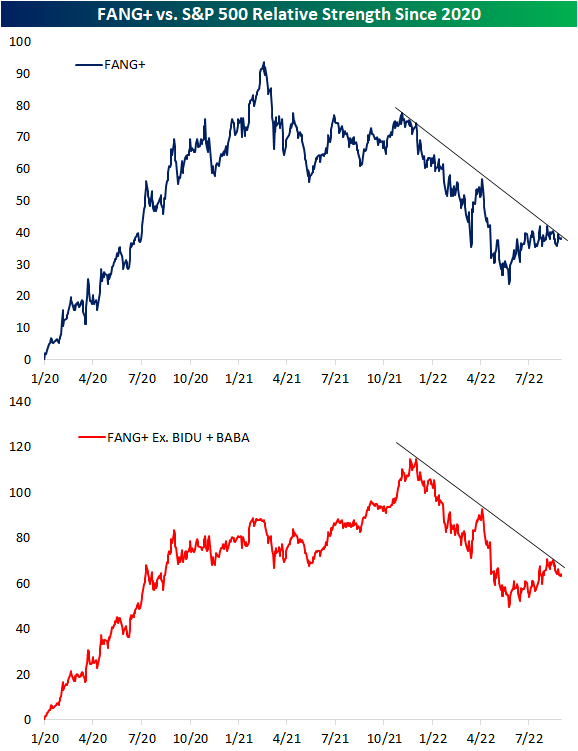 While delisting risk has generally plagued BABA and BIDU for more than a year leaving them 70% and 58% below all-time highs, respectively, at least in the short term there has been some relief. Headlines out late last week reported the signing of a cooperative agreement for auditing these companies resulting in a lower—but still real—probability of delisting.  As a result, BIDU and BABA have left their peers behind as the only two FANG+ members in the green since the broader market’s August 16th high. For BIDU, that positive performance so far has held in spite of a weak reaction to earnings Tuesday as well. In other words, positive news for Chinese members of the FANG+ stocks has helped to mask a degree of the weakness of one of the more important indicators of broader market health. Click here to learn more about Bespoke’s premium stock market research service. 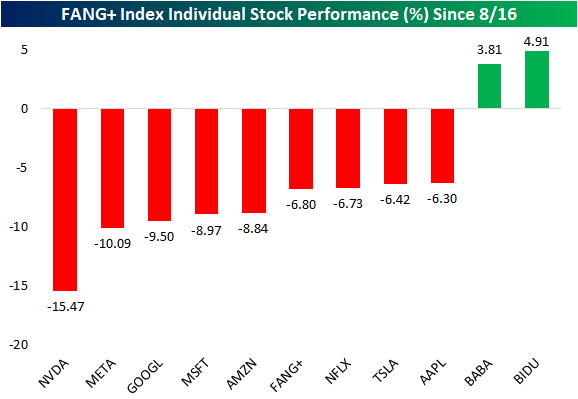