In last week’s Bespoke Report, we discussed what had at the time been an impressive rally in Chinese equities and noted that prior moves of that magnitude have typically been followed by additional gains.  This week, Chinese equities continued to surge turning that ‘impressive’ rally into an extraordinary one.  Today’s 5.7% rally in China’s CSI 300 Index has brought the 5-day change in the index up to 13.6%.  Even by 2020 standards, that’s a big move.

The chart below shows the 5-day rate of change for the CSI 300 dating back to 2002.  The current move ranks as the largest five-day move for the index since December 2014 and the 7th strongest five-day rally since 2002! 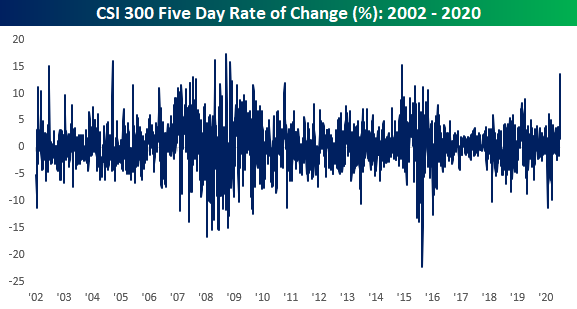 While the current rally is just the 7th strongest for the CSI 300, there have been quite a few more periods where the CSI 300 rallied more than 10% in five days, and in the chart below we highlight each of those periods with a red dot.  Looking at these prior occurrences, they have come during all sorts of market environments.  While there were occurrences right near both of the tops in 2007 and 2015, there were also occurrences in the run-ups to each of those peaks as well. Chinese stocks are notoriously volatile, and moves like the ones we have seen in the last week have historically occurred in all types of market environments. Click here to view Bespoke’s premium membership options for our best research available. 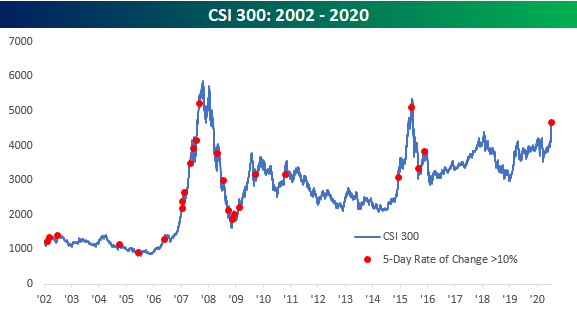