2021 saw Chinese equities get off to a strong start with the CSI 300 leading the way higher versus the US (S&P 500) and Europe (STOXX 600). By the time of the Chinese New Year on February 12th, the CSI 300 had already rallied 11.44% YTD, but the new (Chinese) year has seen a plague of regulatory risk resulting in a complete reversal in that earlier strength.  From mid-February to March the index fell sharply and it has not done much since then.  Chinese equities have now erased the entirety of the double-digit move from the first several weeks of the year as the CSI 300 is currently down 2.5% YTD.  Meanwhile, the S&P 500 and STOXX 600 have both trended higher and are currently up 15.58% and 14.58% YTD, respectively. Given the weakness of the CSI 300, the relative strength lines of the S&P 500 and STOXX 600 versus the CSI 300 have taken off in recent months. 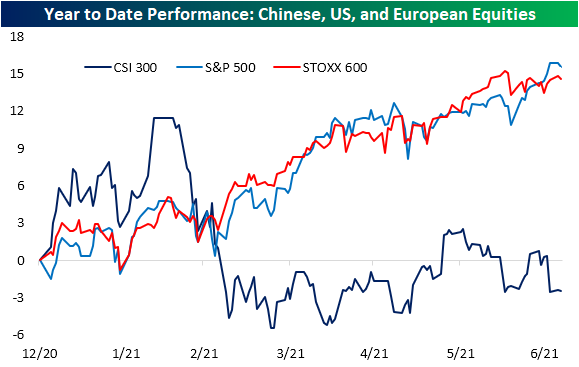 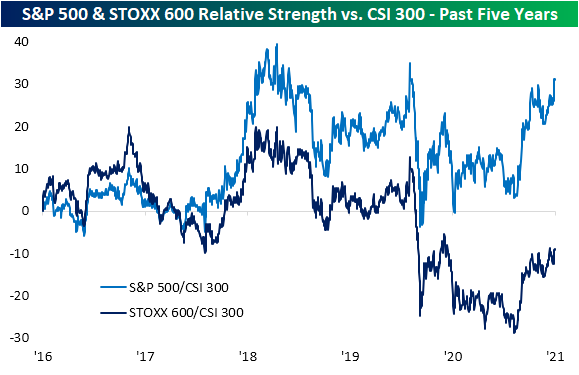 Taking another look at the underperformance of Chinese equities, in the chart below we show the median year-to-date total return of stocks listed on US exchanges with market caps greater than $1 billion grouped by the country, or region in the case of Europe, that they are domiciled in.  As shown, US-domiciled stocks have the largest median return this year at 17.36%.  European companies whose shares are traded in the US are not far behind in performance having posted 13% gains this year. While still having posted a positive total return, Chinese names are up by far less at only 6.26%. Click here to view Bespoke’s premium membership options for our best research available. 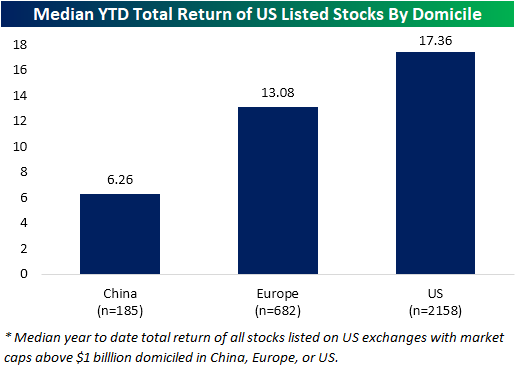