The US-China trade war continues to be stuck in the mud with comments today by the two countries’ presidents being a prime example of the back and forth banter that has been the case for the past year and a half.  Early this morning China’s President Xi Jinping said that the country is willing to make a deal but is also willing to “fight back”. A few hours after, President Trump announced that the deal is “potentially very close”. As with the mixed commentary from the two leaders, the countries’ equities are also looking quite different as US equities continue to reach towards all-time highs and Chinese equities sit firmly below their 52-week highs.

While the pullback this week for the S&P 500 leaves the index less than half of one percent below its all-time highs, Chinese equities by proxy of the Xtrackers CSI 300 A-Shares ETF (ASHR) is over 10% below its 52-week high of $30.72 that was put in place back on April 5th.  Since reaching that high, ASHR has continued to be stuck under resistance just over $29. The most recent failed test of this resistance took place earlier this month. A 1.69% decline today has left ASHR over 5% below this recent high. Additionally, for the first time since October 8th, ASHR has closed below both its 50 and 200-DMA.  While that could be taken as a bearish sign, the past few times the ETF has crossed below was followed by another run back up to that resistance near $29. Start a two-week free trial to Bespoke Institutional to access our interactive Chart Scanner, Trend Analyzer, and more. 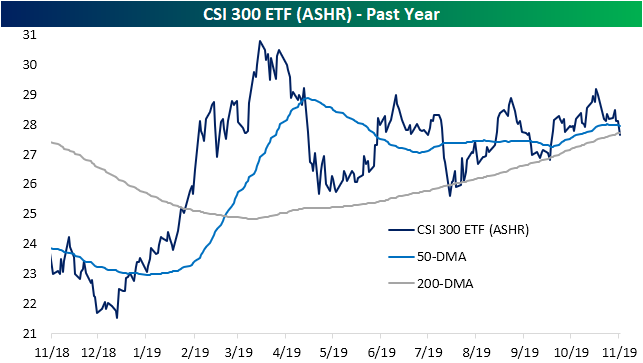