After surging to 52-week highs at the very end of 2020 and into the new year, the Xtrackers CSI 300 ETF (ASHR) tracking China A-Shares collapsed back below its 50-DMA. The decline not only left the ETF in between its 50 and 200-DMA but also brought it back within the range between roughly $37 and $40 that traces back to the ETF’s range from November and December of last year. On Friday, that ended.  ASHR popped almost 3% to not only move out of that range but also to finally move back above its 50-DMA for the first time since late April when there was a false breakout only lasting for a day.  This time around, that breakout appears to be much less of a pump fake with a decent follow-through. Friday’s rally has continued into this week with ASHR up another 0.38% today following a 1.1% rally yesterday.  The ETF now trades 3.86% above its 50-DMA which is now trending sideways rather than downward as it has for the past few months.  Click here to view Bespoke’s premium membership options for our best research available. 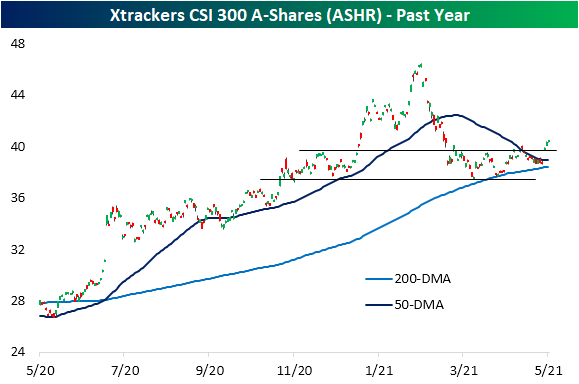