Chart of the Day – Apple (AAPL) Falls From the Tree

It’s been a rough several days for a lot of stocks, including the S&P 500’s largest stock – Apple (AAPL).  Yesterday, the stock saw a successful test of its 200-DMA, but the bounce didn’t last long, and while some time remains in the trading day, the stock is on pace to close below that level for the first time in more than a year.  Warren Buffett commented earlier this month that selling some of his holdings in AAPL was ‘probably a mistake,’ but as the stock sells off, the trade is looking better and better.  Let’s just hope that for the broader market’s sake (it is the largest stock in the S&P 500) that Buffett’s ‘mistake’ doesn’t end up being that he didn’t sell his entire stake. After all, AAPL’s average closing price in Q4 2020 (the quarter that Buffett sold shares) was $120.28, and as of this afternoon, the stock is barely hanging on to $120.00. 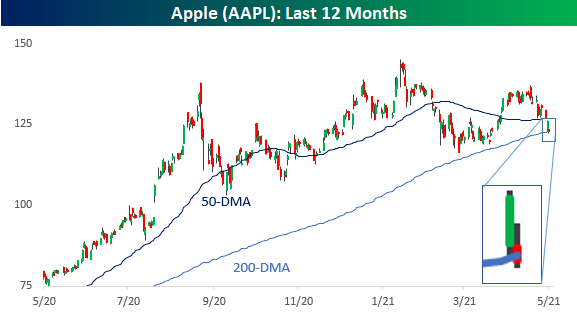 As mentioned above, AAPL has closed above its 200-DMA every day for more than a year.  That’s not the longest streak in the stock’s history, but it is one of the longest.  The last time there was a streak that lasted longer was in the 383 trading days ending in February 2018 after the volatility crash.  In the post-financial crisis period, the current streak is the fourth such streak of more than a year, and going back to the early 1980s, there have been seven other streaks that lasted a year or more. 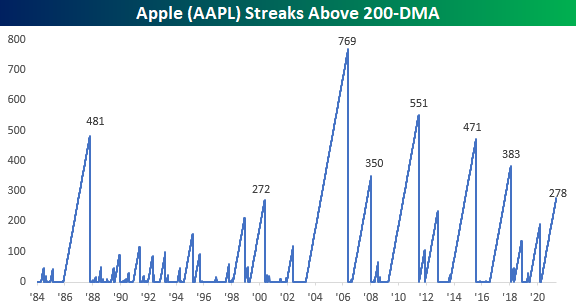 Now that AAPL is on the verge of ending this streak, what now?  The table and chart below show AAPL’s performance following the end of prior streaks where the stock went a year or longer without closing below its 200-DMA. For each period, we show the stock’s performance from the close on the first day that the stock closed below the 200-DMA.  AAPL’s performance over the following week and month has been mixed with a downward bias as the stock’s median performance was a decline of 3.06% and 5.52%, respectively.  Three months later, the stock tended to turn around posting a median gain of 17.1% with gains all seven times.  Moving out over the next six and twelve months, though, returns turned more mixed.  While the stock still saw positive returns on both an average and median basis, the magnitude of the gain wasn’t any larger than the three-month average and median returns.  More often than not, in fact, the stock’s six-month performance was lower than the three-month performance.  In other words, while the stock bounced in the short to intermediate-term, it started to run out of gas from there.