Can the Market Bottom on a Friday?

It’s often said that equity markets can’t bottom on a Friday. One of the reasons for this line of thinking is that during a market downturn, no one wants to hold onto or bid up equities into a weekend for fear of further bad news.  It may just be a matter of semantics, but based on that line of reasoning, the more accurate way to phrase it would be that markets can’t bottom on a Thursday or rallies can’t begin on a Friday.  However you want to think about it, the chart below shows the number of times the closing low of a 10%+ correction has occurred on various weekdays.

Of the 97 S&P 500 corrections since 1928, the day of the week that has marked the low close of a 10%+ decline the least frequently is actually Wednesday with only 10.  Behind Wednesday, Friday has been the second most infrequent day of the week for a bottom (15), and Thursday is the only other day of the week where the S&P 500 has made a low on a closing basis less than 20 times.  The days of the week where the S&P 500 most frequently bottoms are Monday and Tuesday with 26 and 28, respectively.  Start a two-week free trial to Bespoke Institutional to access our full suite of research services and interactive tools. 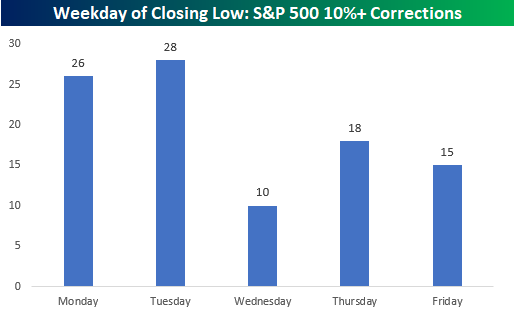 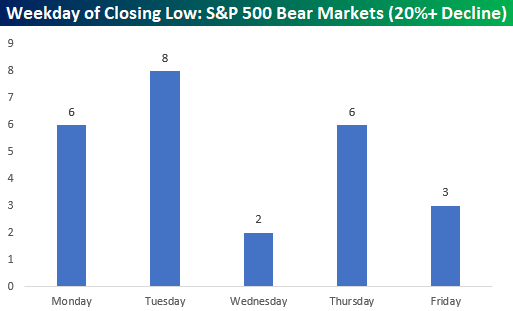