Can Cadence (CDNS) Keep Its Streak?

Cadence Design (CDNS), an electronic design supplier and engineering services firm, reports earnings after the close tonight. The company is expected to report EPS of $0.51 and sales of $576.3 million compared to EPS of $0.49 and revenues of $532.5 million one year ago.  Over the past couple of years, CDNS has been notable in the stock’s price reaction on earnings days has been consistently positive.  Headed into tonight’s report, the stock is on a streak of six consecutive quarters with a positive full-day reaction.  That is the longest such streak for CDNS since a six quarter long streak that came to an end in January of 2013.  The company has also frequently reported earnings triple plays (EPS and sales beat in addition to raised guidance) in the past couple of years with half of the last ten quarters experiencing a triple play.

Given the company’s business is tied with that of semiconductors (SMH), while not wholely a semiconductor company itself, CDNS has generally followed the trends of the industry over the past few years. But there has been a few divergences in the past year. Whereas the two had been in steady uptrends earlier in the cycle, then trending sideways together for most of 2018, the Q4 2018 sell-off hit SMH much harder.  Since the sell-off, both have rocketed higher in 2019; CDNS even more so than SMH. More recently though, since shortly after CDNS’s last earnings report in July, it has underperformed as shown in the relative strength chart in the second chart below.  As CDNS sits in a downtrend, SMH has managed to reach new highs. While the two have not necessarily perfectly tracked each other, the move higher in the semis would have suggested CDNS to move higher. 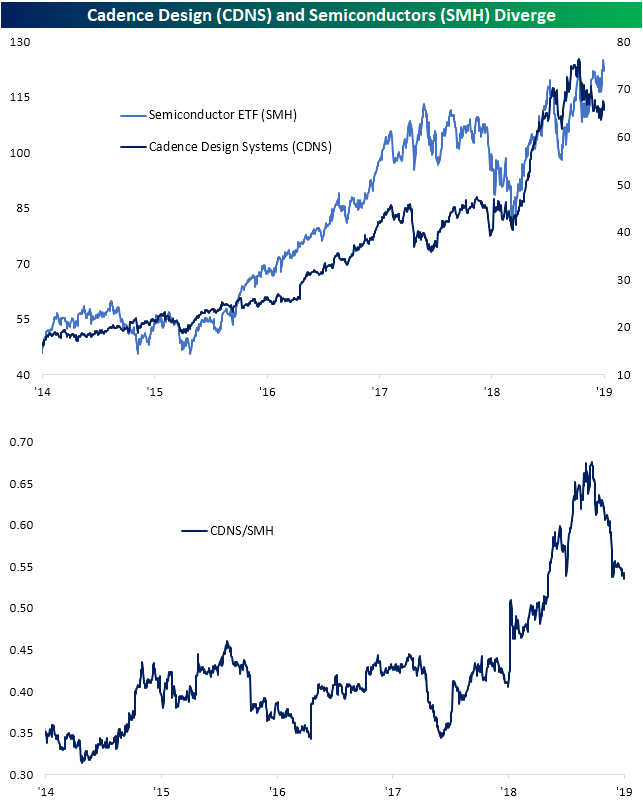 Headed into this quarter’s earnings, the chart of CDNS has actually begun to reverse this downtrend.  After finding support around prior lows at ~$63, the stock broke out of its downtrend but failed to hold above its 50-DMA.  If the past six quarters’ trend of positive reactions to earnings continues—in addition to the broader support of related semiconductor stocks—it could be the catalyst needed for the stock to continue to break its downtrend. Start a two-week free trial to Bespoke Institutional to access our Earnings Explorer and much more. 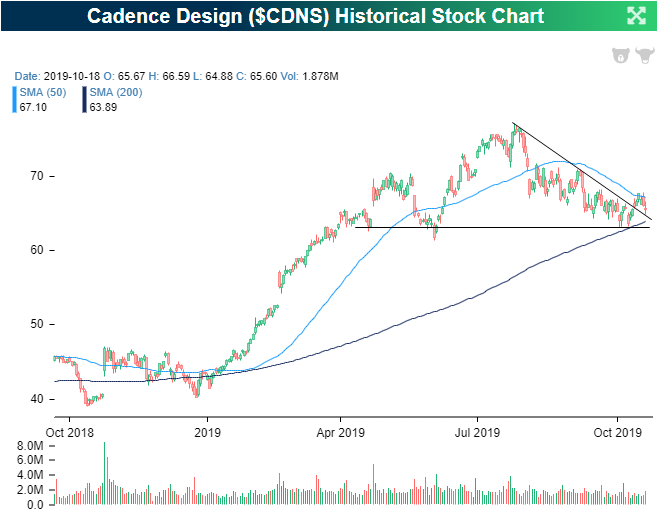