Bulls No Longer in Charge

As the S&P 500 has pulled off of its record highs in the past week, investors have been more hesitant to label themselves as bulls.  This week’s survey of individual investor sentiment from AAII saw 34.24% of investors responding as bullish compared to 40.72% last week.  This was the biggest one week decline since an 8 percentage point drop in the first week of October.  After spending two weeks above it, this decline has also brought bullish sentiment back below its historical average. Additionally, this is the first time in two weeks that bullish sentiment was not the predominant sentiment level.  Despite this, the bull-bear spread is still in favor of bulls by 5.21 percentage points as has been the case for the past six weeks. 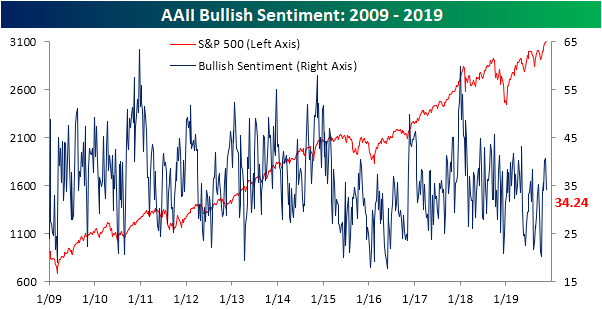 Although the bull-bear spread still leans positive, it has been narrowing over the past couple of weeks.  This is on account of bullish sentiment pulling back with those losses going to the bears. Bearish sentiment is now at 29.03%, up from 24.82% last week.  Bearish sentiment is still below (but now close) to its historical average of 30.36% as has been the case for the past five consecutive weeks.  This is the longest such streak since a seven-week run ending on May 9th. 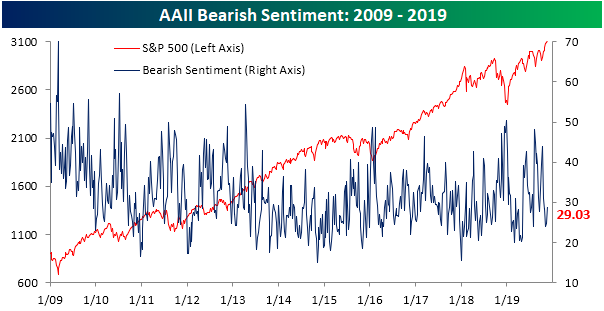 As mentioned before, bullish sentiment no longer takes the crown for being the predominant sentiment. Instead, the highest share of investors, 36.72%, now consider themselves neutral. 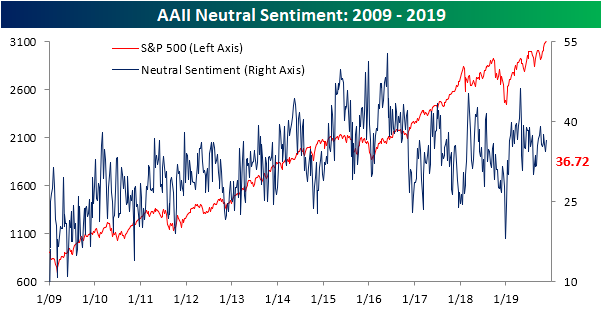 Neutral sentiment has been above its historical average for 15 consecutive weeks now. This is just the eighth time in the history of AAII’s survey where there has been a streak of 15 weeks or more. Most of these have actually occurred in the current bull market with at least one occurring in each of the past five years except for 2018.  Even though the current run is long, previous streaks lasted much longer. The current streak is the longest streak since the one in 2017 that ultimately ended at 25 weeks long. Even that was not the longest streak on record though. That accolade belongs to the 41-week streak that lasted from 2015 through late 2016.  In other words, there is a historical precedent for extended streaks of above-average neutral sentiment. 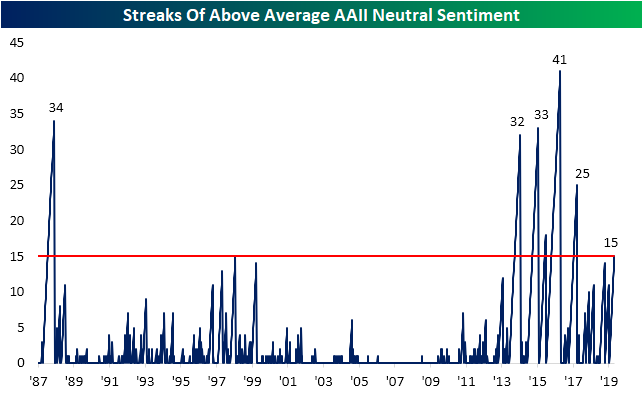 Performance following past streaks once they reach 15 weeks has leaned on the weaker side with underperformance one month, three months, and six months later.  One and three months out the S&P 500 has actually averaged a decline.  On the other hand, the next week has typically experienced outperformance as has the next year, albeit to a lesser extent on average. Sign up for Bespoke’s “2020” special and get our upcoming Bespoke Report 2020 Market Outlook and Investor Toolkit. 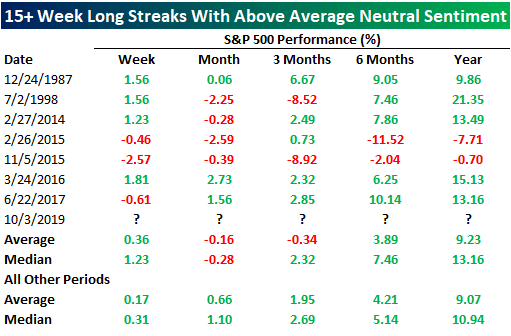