Bulls Get The Jitters

The S&P 500 has traded in the tightest range between its weekly high and low (1.02%) since the last week of 2020’s under 1% range.  Even though there has been a tight range, the S&P 500 is up 40 bps over the past five days through yesterday’s close, and in the process, it has pinged up to record highs multiple times on an intraday basis this week.  Regardless, the lack of any distinguished push in either direction has sent some jitters among individual investors.  The percentage of respondents to the AAII sentiment survey reporting as bullish fell 10.1 percentage points week over week to 42.6%.  That is the lowest reading in bullish sentiment since the first week of March and was the largest one-week drop since the week of November 19th when it fell 11.5 percentage points. 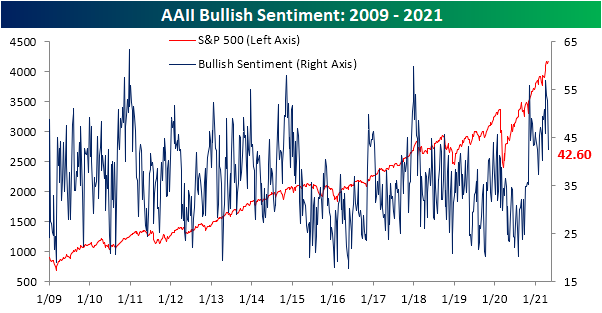 There are a handful of comparable periods in the history of the survey that bullish sentiment has fallen at least 10 percentage points from a reading above 50% while the S&P 500 traded higher over that same week.  In the table below, we show the 16 past times this has happened without another occurrence in the prior 6 months.  As shown, this most recent instance marks one of the smaller changes in bullish sentiment of these and is also one of the few periods that the S&P 500 was not higher by at least 0.5% in the week leading up to these moves in sentiment.

Overall, these types of moves have not been positives for forward performance of the S&P 500; particularly in the near term.  Short-term returns are typically weak with average declines one week, one month, and three months out.  We would note that while the average one-week return is negative, the S&P has actually been higher over the next week the last seven times dating back to 2003.  Six and twelve months later have more often been met with positive returns. In fact, the vast majority of instances over the past two decades have resulted in the S&P 500 higher over those time frames.  But on an average and median basis, those returns have been smaller than the norm. 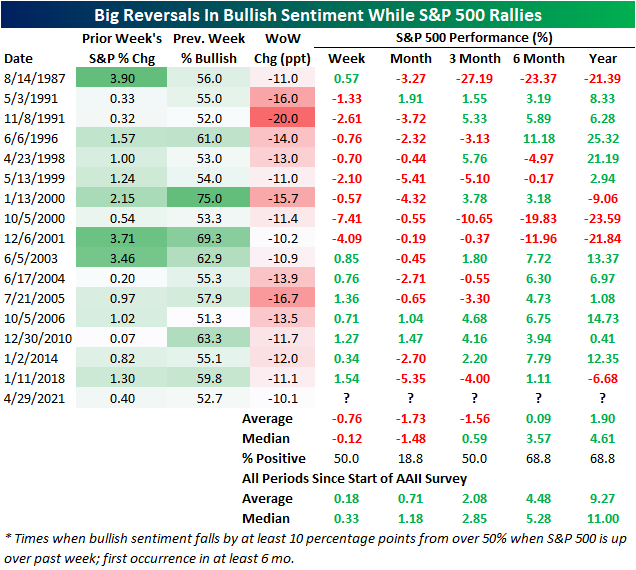 The losses to bullish sentiment were shared nearly equally between bearish and neutral sentiment.  Bearish sentiment rose 5.2 percentage points to 25.7% which is the highest reading since mid-February.  That was also the biggest one-week uptick in market pessimism since September. 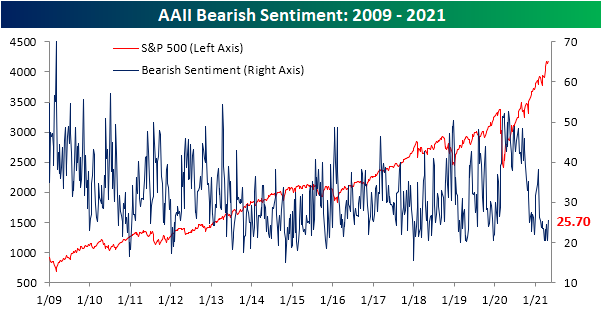 The combined moves in bullish and bearish sentiment meant the bull-bear spread dropped by 15.3 points to 16.9.  While that is only the lowest level in the spread since the first week of March, it was the biggest one-week decline since last June. 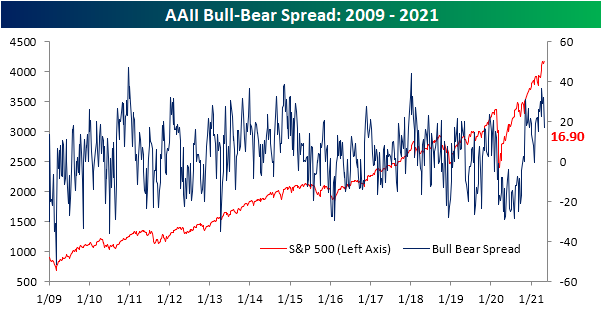 Neutral sentiment picked up the difference rising by five percentage points. Similar to the bull-bear spread and bullish sentiment, that is highest reading since early March. Click here to view Bespoke’s premium membership options for our best research available. 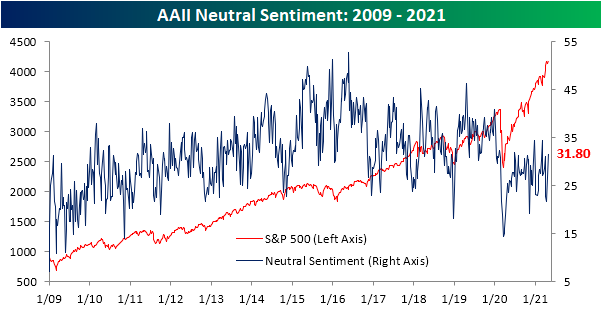