Even though equity markets shrugged off geopolitical tensions last week, sentiment actually declined based on AAII’s weekly survey.  However, as equities have continued to move higher over the past week on solid earnings and the situation in the Middle East has further simmered down, sentiment has picked back up.  This week, 41.83% of investors reported bullish sentiment, up from 33.07% last week.  Although this only brings bullish sentiment to similar levels as the final week of 2019, that 8.76 percentage point increase this week was the largest weekly increase since mid-October. This also lifts it back above its historical average of 38.08%. 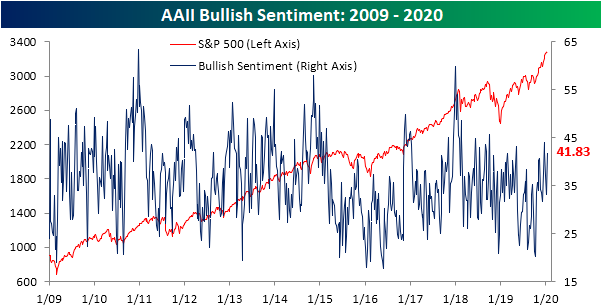 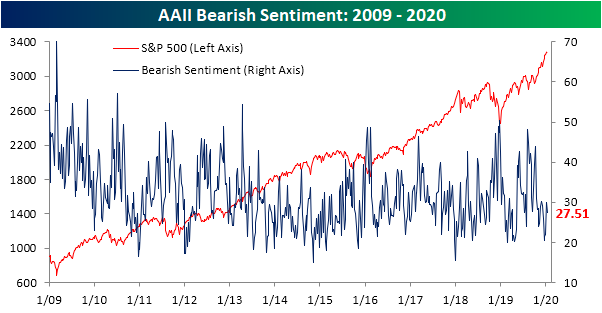 Considering most of the gains in bullish sentiment did not come from bears, neutral sentiment tanked to 30.66%.  That is the largest weekly decline since August 8th when it fell 7.35 percentage points compared to the 6.38 percentage point drop this week.  While it’s now at the lower end of the past year’s range, just two weeks ago neutral sentiment topped 40%.  Declining 10.25% in that time, this was the first time that neutral sentiment experienced a double-digit drop in the span of two weeks since May.  This drop has also snapped a 22-week streak that neutral sentiment has remained above its historical average. Going back through the history of the survey, there have only been five longer streaks, the next longest of which ended at 25 weeks in 2017.  Start a two-week free trial to Bespoke Institutional to access our interactive economic indicators monitor and much more. 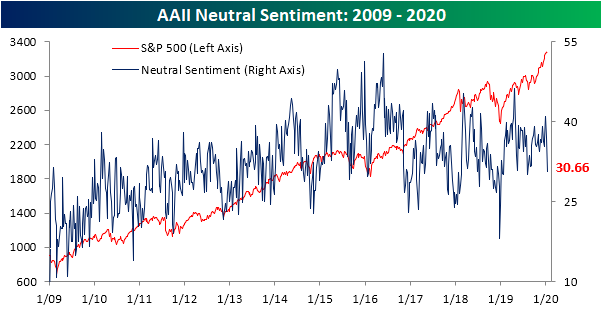