While the past week’s gains are mostly being erased today, for the most part, the S&P 500 has been trading firmly higher which has lifted sentiment.  AAII’s weekly reading on bullish sentiment was lifted as a result, rising from 22.15% to 27.16%.  That is the highest level of bullish sentiment since June 11th, and the 5 percentage point week over week increase was the biggest jump since the end of May. Not only was it the largest single-week increase in over a month, but this week snapped a four-week long streak in which bullish sentiment has declined. With the streak now over, it was the longest streak of consecutive declines in bullish sentiment since April of 2018 when sentiment also fell for four weeks. While higher this week, bullish sentiment is still below its historical average of 38% by at least one standard deviation as it has been for four straight weeks now.  That is the first such streak since August of last year. 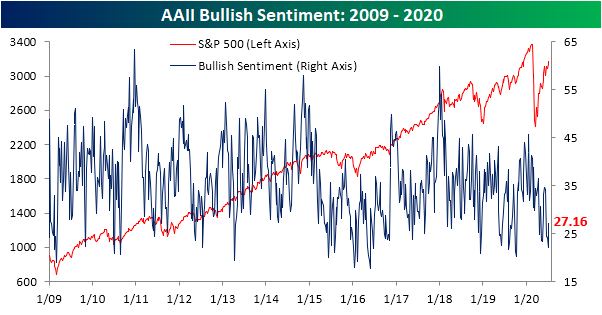 Meanwhile, bearish sentiment has come back down reaching 42.67%.  Mirroring bullish sentiment, that is the lowest reading for bearish sentiment since June 11th, but it remains above its historical average by at least one standard deviation as has been the case for the past four weeks. 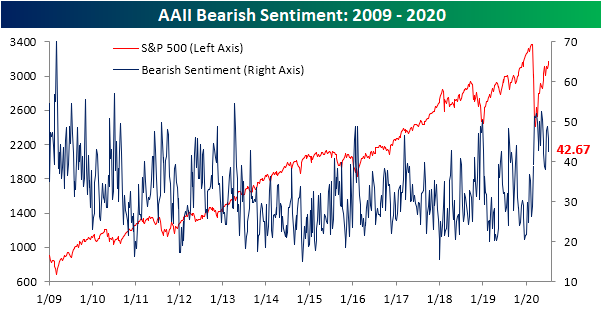 Bearish sentiment was not the only one to fall this week.  Neutral sentiment also slightly pulled back falling to 30.17% from 31.96%. Although lower this week, neutral sentiment is still at a much more normal reading than the past few months’ extreme lows.  In fact, this week marked the first time that neutral sentiment was above 30% for back to back weeks since February. Click here to view Bespoke’s premium membership options for our best research available. 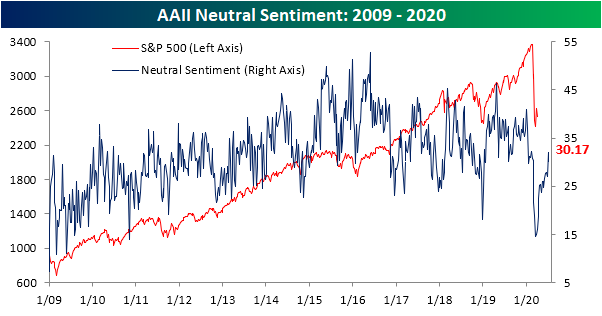