Bullish Returns During the Year Of the Ox

Friday starts off the Chinese Lunar New Year. Celebrations will last for about two weeks though the official legal holiday is seven days long. As such, Chinese markets will be closed from Thursday (New Year’s Eve) through next Wednesday.   The Chinese lunar calendar is also associated with a cycle of 12 animal zodiac signs, and 2021 will be the year of the ox. While we would be the first to caution against investing based on zodiac signs, ironically, the year of the ox has historically been met with some of the most bullish market performance in the US.  As shown below, in the first week of Chinese New Years that have been marked by the Ox, the S&P 500 has seen an average gain of 0.17%. Only the years of the pig, rabbit, and tiger have seen a stronger performance in the first week of the Chinese lunar year for the S&P 500.

But as for annual performance, from the start of the Chinese lunar year until the end, years of the ox has been marked by the best performance for the S&P 500 with a 13.56% average gain.  The past few years that were the year of the ox were 2009, 1997, and 1985.  The year of the tiger, which the last one was in 2010, comes in with the second-best performance. 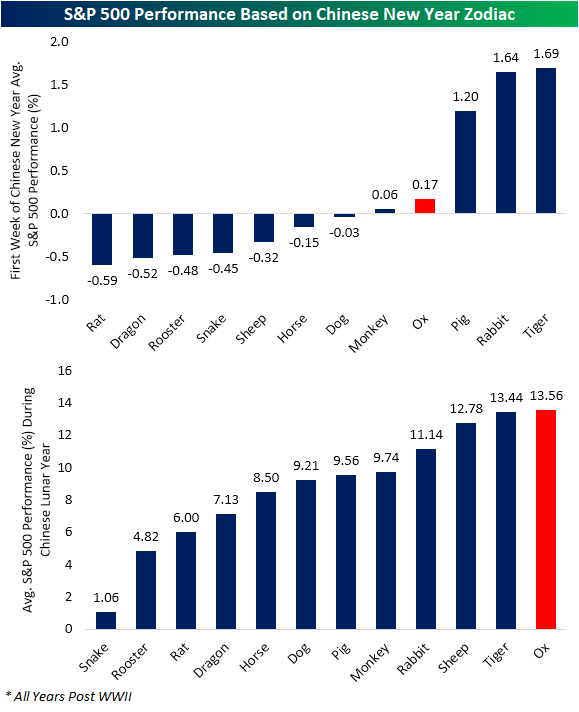 As for the performance of the S&P 500 in the shorter term—particularly around the time when the Chinese markets are closed—in the chart below we show the average intraday performance for the first five trading days of the Chinese New Year for all years since 1990.  Despite market closures abroad, the US tends to move steadily higher- and that’s no bull! Click here to view Bespoke’s premium membership options for our best research available. 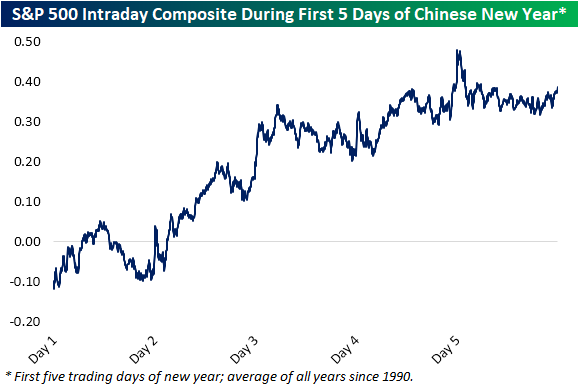