Equities have been on a hot streak recently with the Dow and S&P 500 snapping six-day winning streaks earlier this week and the Russell 2,000 ended a seven-day winning streak on Wednesday. As a result, sentiment has understandably followed price action. The percentage of investors reporting as bullish in the AAII’s weekly survey has risen to 45.5% from 37.4% this week. That is a return back to similar levels to the end of 2020.  The 8.1 percentage point jump this week was the largest for bullish sentiment since a 17.88 point increase on November 12th. 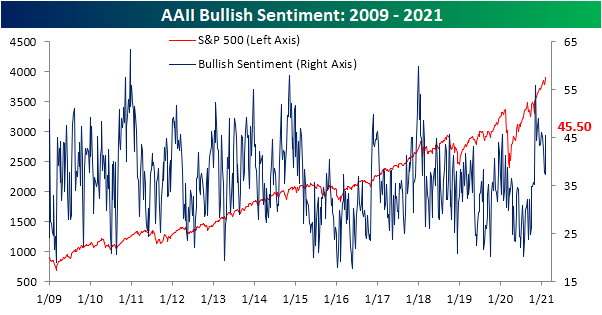 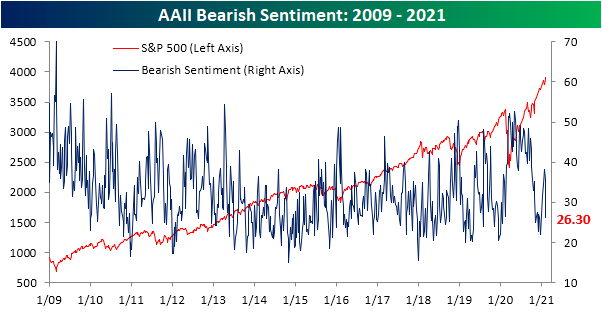 The large moves in opposite directions of bullish and bearish sentiment led the bull-bear spread to leap from a barely positive reading of 1.8 all the way up to a five-week high of 19.2.  That comes after it was actually negative only two weeks ago.  The 17.4 point increase stands in the top 10% of all weekly changes in the spread and was the largest move higher in roughly three months since the week of November 12th when it rose 24.5 points. 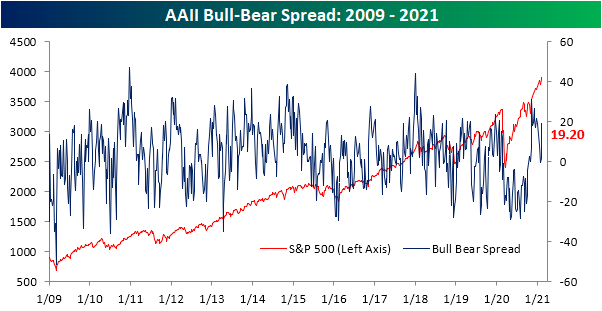 Across the history of the AAII survey dating back to 1987, there have been 224 weeks including the most recent in which the bull-bear spread has risen by at least 15 points in a single week. Only 39 of those have occurred without another occurrence in the previous 3 months. Whereas historically, the AAII survey has been more of a contrarian indicator meaning more bullish sentiment has been followed by weaker returns and vice versa for more bearish readings, in terms of the second derivative of the bull-bear spread, big jumps have preceded stronger than normal returns.  As shown below, past times that the bull-bear spread has risen at least 15 points in one week without another occurrence in the past 3 months, the S&P 500 has consistently traded higher over the next few weeks and months with average gains larger than the norm for each period.  Moves higher have also been very frequent. One year after these past occurrences, the S&P 500 has traded higher better than 90% of the time. 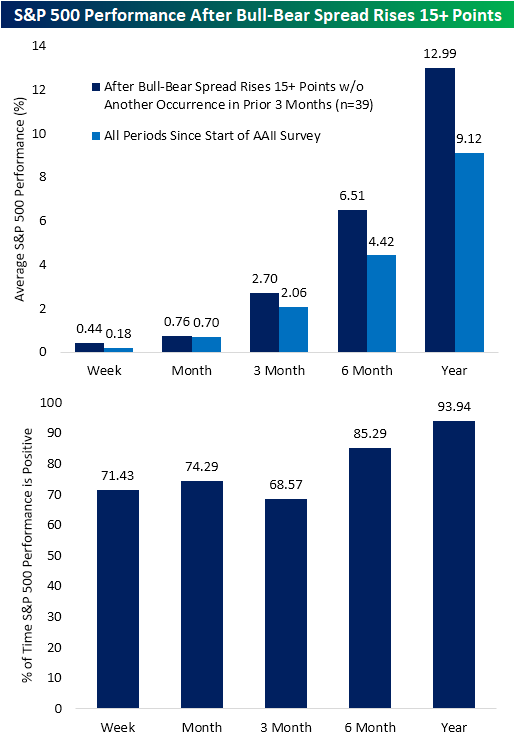 While overall sentiment tipped bullish in a big way this week, neutral sentiment has also continued to rise. For the third week in a row, a greater share of respondents reported neutral sentiment. That reading rose to 28.3%, the highest since the week of Christmas. Click here to view Bespoke’s premium membership options for our best research available. 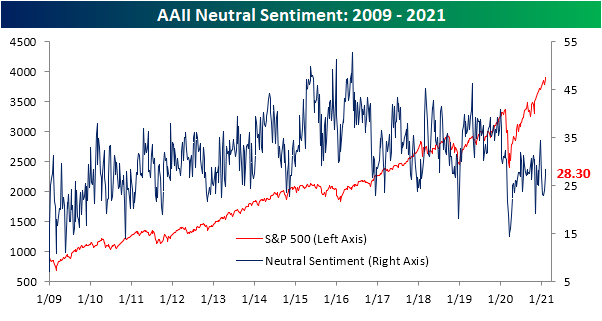