We’ve talked a lot in the past about how the overwhelming majority of the equity market’s gains in the last several decades have come outside of regular trading hours.  When you consider the fact that active trading in US equity markets is less than 20% of all the time in a given week, it would make sense that most news occurs outside of trading hours.  Therefore, when good news breaks outside of trading hours, stocks typically gap higher in response, and when there’s bad news, they gap lower at the next open.

So far, 2022 has generally been a case of the latter.  With issues like rising prices, tighter monetary and fiscal policy, and the war in Europe, there really hasn’t been much in the way of good news for investors to digest over the weekends, and therefore, when markets do start a new week of trading, performance has been anemic at best.  Three charts illustrate this trend.

This morning the S&P 500 tracking ETF (SPY) gapped up 0.80% which was the largest upside gap in SPY to kick off a new trading week since late November.  Today’s strong open also broke a streak of 20 straight weeks where SPY’s opening gap to kick off a week was negative or a gain of less than 0.30%.  The chart below shows historical streaks where SPY’s opening gap on the first trading day of the week was negative or below 0.30%.  The streak that just ended was the third-longest in SPY’s history, behind the 30-week streak ending August 2005 and the 22-week streak in June 2006.  Both of those streaks came in the middle of the Fed’s early 2000s rate hike cycle where it raised rates by 25 bps for 17 straight meetings spanning June 2004 through June 2006 and took the Fed Funds Rate from 1.0% to 5.25% in the process. 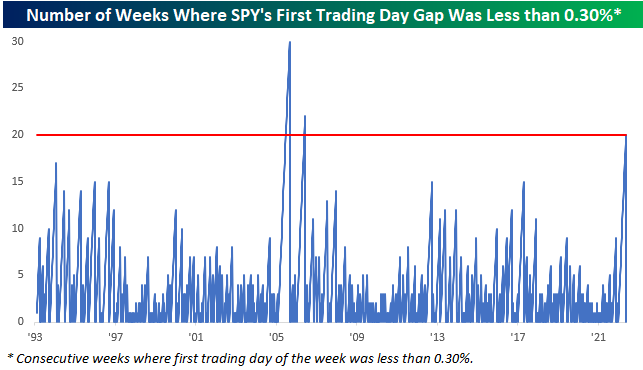 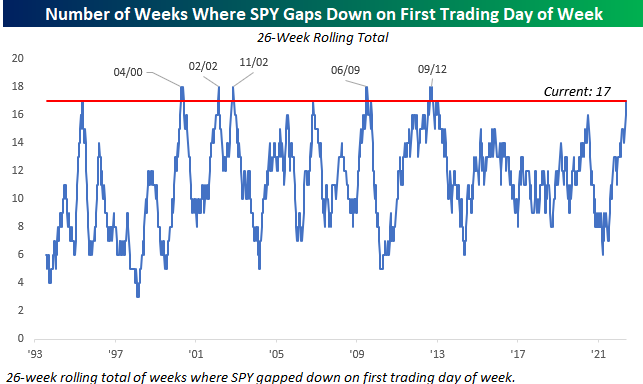 Lastly, with the S&P 500 consistently opening lower to kick off the week, it would only make sense that the six-month average opening gap of the trading week would also be negative, and that’s exactly what we have seen.  Over the last six months (26-weeks), SPY’s average opening gap to kick off a trading week has been a decline of 0.28% which is the weakest reading since the COVID crash (when there was a lot of bad news) and before that, the only two other weaker periods were in the six months ending in July 2009 and February 2002.  If you were involved in the market in either of those periods, you remember that there was not a lot to be optimistic about in either period…sort of like now. They call it “the Mondays” for a reason, and lately, equities have had a bad case of them.  Click here to become a Bespoke member today! 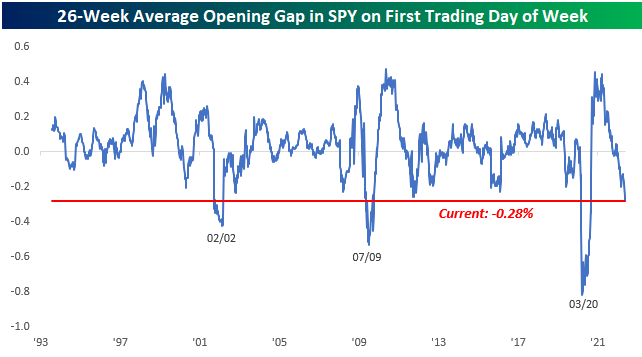