As we noted in an earlier tweet, in tandem with the S&P 500 (SPY) here in the US, equities have surged around the globe over the past week.  Countries like Taiwan (EWT), Germany (EWG), and Sweden (EWD) have posted some of the most impressive gains with double-digit percentage moves. However, these are also some of the countries currently trading the furthest below their 52-week highs and are down the most since the start of the year.

Relative to the rest of the world, the S&P 500’s one-week performance has actually been middling at just over 5%. Of the 23 major global economies shown below (those which we track in our Global Macro Dashboard), there are only six other countries that have experienced smaller gains. Then there is Brazil (EWZ), the sole country in the red.  Inverse to what have been the top performers in the past week, Brazil generally has been a massive outperformer since the start of 2022.  Alongside Mexico (EWW), Brazil is the only country to have moved higher year to date with an impressive 10.5% gain.  After last week’s decline, though, EWZ is now back below its 50-DMA. 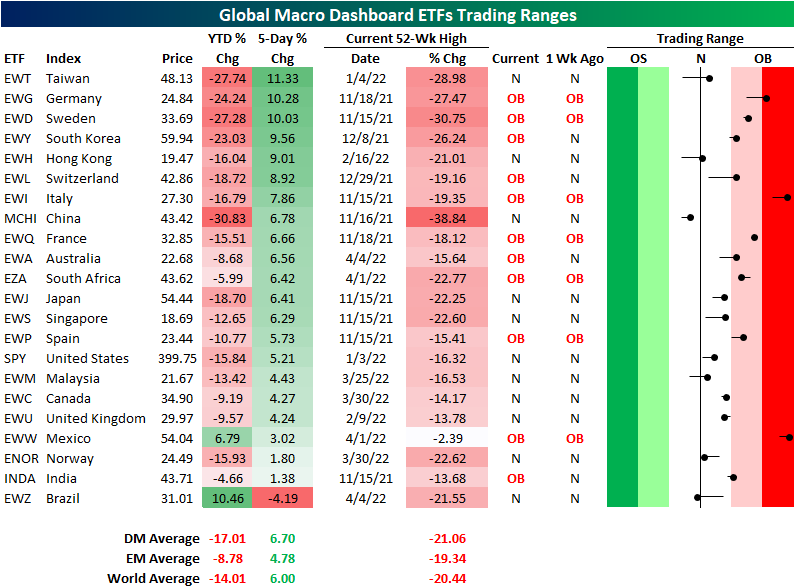 Below we take a look at the 100-day rolling correlation of the daily moves of the Brazil ETF (EWZ) versus the average of all the other country ETFs listed above.  That correlation has rolled over quickly in the past several months as Brazil has turned into the black sheep of global equities. In fact, that correlation is currently approaching the low end of the past couple of decade’s range. In fact, currently it is at the lowest level since December 2019 and prior to that the fall of 2018 was the only other recent example of Brazilian equities being this disconnected from other global stock markets. Click here to learn more about Bespoke’s premium stock market research service. 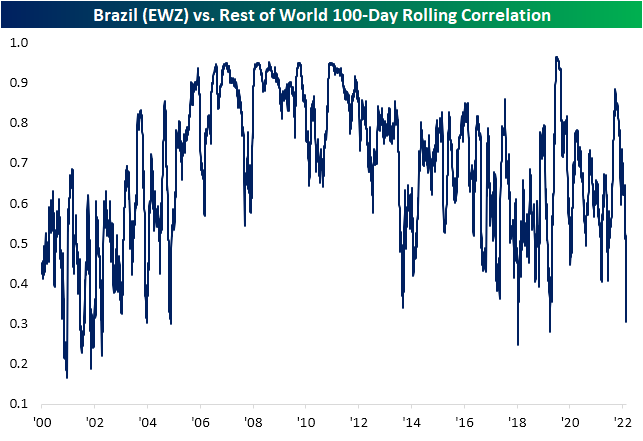