Turnaround Tuesday has carried into hump day with the Dow up well over 5% again today as of this writing.  As we mentioned in an earlier post, that means the Dow is on track for its first back-to-back up days for the first time since early February.  Remarkably, even with only two consecutive up days, the index is closing in on exiting a bear market. For that to happen, the Dow would need to close above the 22,310.32 level which is 20% off of the bear market closing low (Monday’s close at 18,591.93). At today’s high, the Dow was less than 300 points or 1.32% from that level.

As for the individual stocks contributing to the rally, Boeing (BA) deserves a lot of thanks.  The stock has been hit very hard during the sell-off. Whereas the stock has traded in the mid-$300 for much of the past two years and up to mid-February, as of late last week BA had fallen below $100.  That massive drop in price means that day to day movements in the stock would have a lesser impact on the level of the price-weighted Dow. In spite of this, BA has contributed over 400 points to the Dow’s rally in the past two days alone!  That is much more than any other stock in the index with the next biggest contributor being UnitedHealth (UNH) who’s 335.44 point contribution comes as its share price is currently around $100 more than BA.  BA’s contribution is also almost 200 points more than those of McDonald’s (MCD), Visa (V), and Apple (AAPL). Of all 30 Dow stocks, there is only one that is down over the past couple of days, subtracting from the index’s rally: Walmart (WMT). Given WMT has held up fairly well recently, its performance is yet another example of investors’ focus on the more beaten down names that we have noted earlier today and in last night’s Closer. Start a two-week free trial to Bespoke Institutional to access Closer and full range of research and interactive tools. 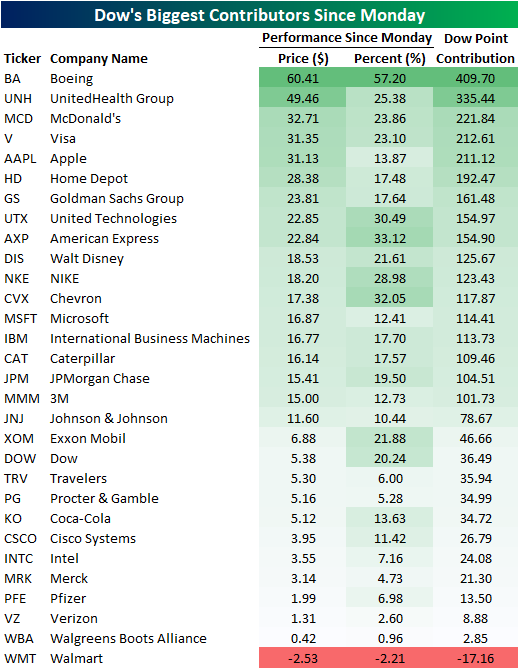