Bitcoin hit record highs over the weekend, but it’s having a week to forget.  After topping $58,000 on Sunday, bitcoin’s price barely held $45,000 this morning, and at current levels is still down over 17.4% from its record high three days ago.  As sharp as bitcoin’s decline seems now, we’d note that it is still 34% above its 50-day moving average (DMA) and more than 167% above its 200-DMA.  Those spreads show just how strong the recent rally in bitcoin has been. 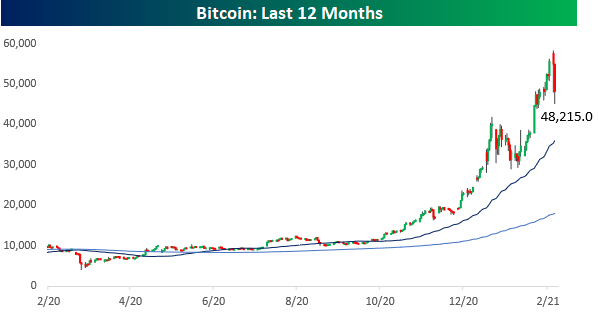 While bitcoin is down over 17% from its recent highs, at this point it has been a relatively modest pullback for the leading crypto-currency.  The chart below shows the history of bitcoin’s daily price relative to its prior all-time high going back to 2015.  During the last six years, bitcoin’s average drawdown from its all-time high has been 35%, or double the current level of 17.4%.  While the pullback this week has been swift, you don’t even have to go back a month to find a larger drawdown from a record high.  Back on 1/27, bitcoin was down over 26% from its prior record high of 41,981.  That prior record high is 12% below current levels. Click here to view Bespoke’s premium membership options for our best research available. 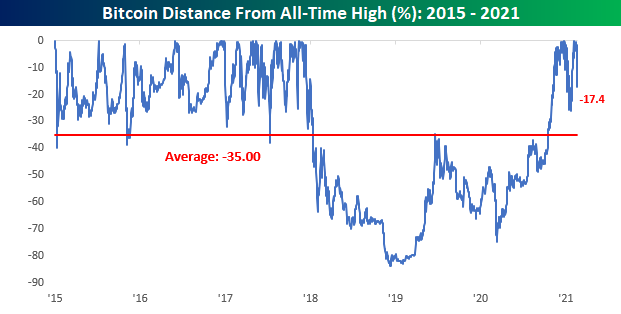