When it was MicroStrategy (MSTR), it was dismissed as a gimmick, but now that Tesla (TSLA) has used a big chunk of the cash on its balance sheet to buy bitcoin, more people are going to take notice.  TSLA hasn’t historically been a company to shy away from publicity, so some will write off today’s announcement as a marketing stunt, but at $1.5 billion, it would be a pretty big stunt.  Also, while it’s easy to forget, TSLA is one of the largest companies in the world.

Prior to TSLA’s announcement, bitcoin was already up on the day, but once the news hit, the rally reached a whole different level.  Bitcoin is currently trading up over 11% on the day making it the best one-day rally for the crypto-currency since last April.

With today’s rally, bitcoin is also breaking out above its highs from early January and trading at over $43K. 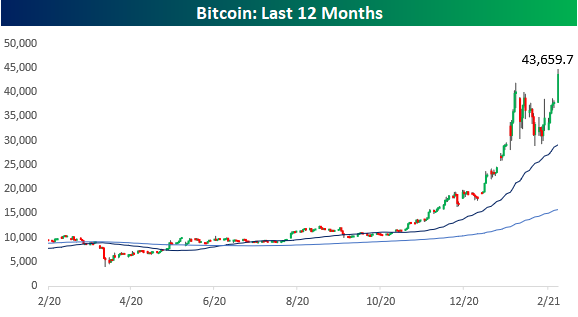 Not only is bitcoin at new highs for the year, but the late 2020 breakout after three years of consolidation is continuing to gain steam.

One of the primary arguments for bitcoin these days is it serves as a digital store of value- or gold 2.0.  Based on the relative strength of bitcoin versus gold, gold 1.0 looks a lot less shiny these days.  When bitcoin last peaked in late 2017, the ratio of bitcoin to gold peaked at just under 15.  A year ago today, the ratio was under six ounces of gold for every bitcoin.  Back in early January, the ratio surged to more than 21 ounces of gold for every bitcoin.  After this morning’s rally, though, one bitcoin is worth more than 23 ounces of gold, and the ratio increases by one ounce for every 4% rally in bitcoin.

So where does interest with the general public currently stand towards bitcoin? One way to track interest is through Google Trends.  The chart below shows search trends for the term ‘bitcoin’ over the last five years. As bitcoin ran up to record highs in late 2020 and early 2021, search interest also picked up but peaked out at levels nowhere even close to where search interest was at the prior peak.  This could be read in one of two different ways.  The bullish case would be that enthusiasm for bitcoin is nowhere near as high now as it was back then, so there’s still much more room to run.  A less bullish take, however, would be that back in late 2017, no one had ever even heard of bitcoin, so they were looking it up just to figure out what it was.  Three years later, though, most people are at least familiar with what bitcoin is, so there is less reason to search for it.  Click here to view Bespoke’s premium membership options for our best research available.