The last several days have been quite the roller coaster ride for bitcoin. Since last Friday, the one-day moves (remember it trades on the weekend) have been down 12%, up 8%, down 11.5%, and up 12.3% today!  Even for bitcoin, this is some crazy volatility. 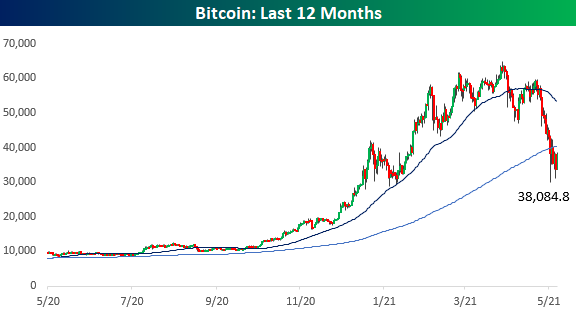 If today’s gain in bitcoin holds above the 8% level (or if it reverses and trades down 8%), it will be the first four-day streak of daily moves of 8%+ since 2013!  Going all the way back to the start of 2011, there have only been four other periods where bitcoin experienced longer streaks of daily moves of 8%+.  What makes the streak even more notable this time around, though, is bitcoin’s market value.  The last time bitcoin experienced a similar streak, it was trading at under $300 per coin.  Today, it’s more than 100 times that at over $38,000 for a total market value of more than $700 billion! 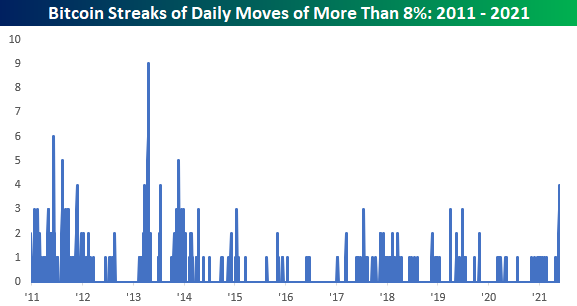 While the last four days have been incredibly volatile for bitcoin, its volatility over the last month hasn’t been nearly as extreme. Over the last 30 days, bitcoin’s average daily move has been just under 5%.  This is now just barely above its most recent peak earlier this year but still above the prior peak of 5.5% seen last April.  Click here to view Bespoke’s premium membership options for our best research available. 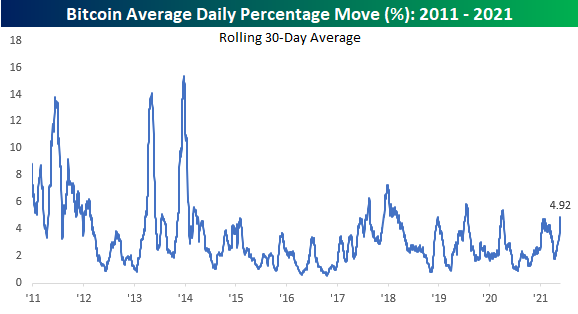