Bitcoin to Ethereum Ratio in Freefall

Risk assets have found some stability in the past month, but one asset that has been absolutely flying higher in Ethereum.  The past week’s rally has risen to a remarkable 51% for the world’s second largest crypto bringing its market cap up from $126 billion to $187 billion.  In that same span, Bitcoin has only gained 15.5%. After those moves, Bitcoin has returned to its 50-DMA while Ethereum has surged through the line. 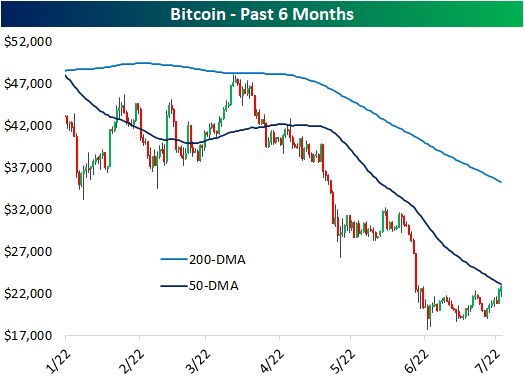 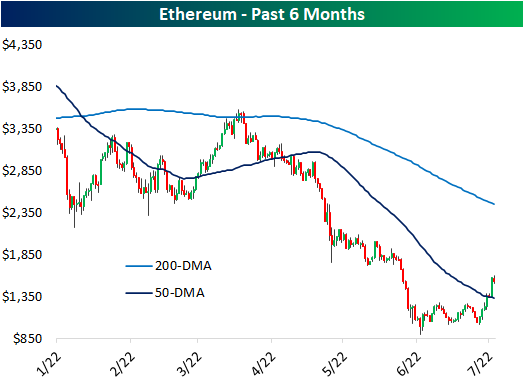 Given that massive outperformance of Ethereum, the ratio of Bitcoin to Ethereum has collapsed. In fact, the ratio has now fallen for seven days in a row, tying three other streaks (September 2019, February 2020, and April of this year) for the longest streaks of consecutive days of declines. 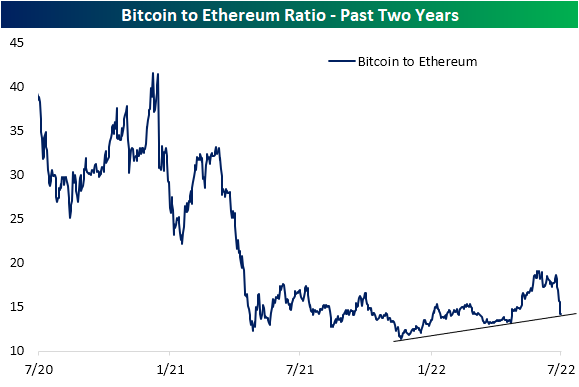 The ratio has fallen considerably as well as consistently in the past week.  Exactly one week ago, the ratio hit a near term high and has dropped 23.5% since then.  As shown above, that brings the ratio down to the rough uptrend line that has been in place since late last year. Since the start of our price data for Ethereum in November 2017, there have only been a handful of other periods in which this ratio has fallen as sharply; meaning times when there has been similar underperformance of Bitcoin relative to Ethereum.  The most recent of these was a little over a year ago in May 2021. 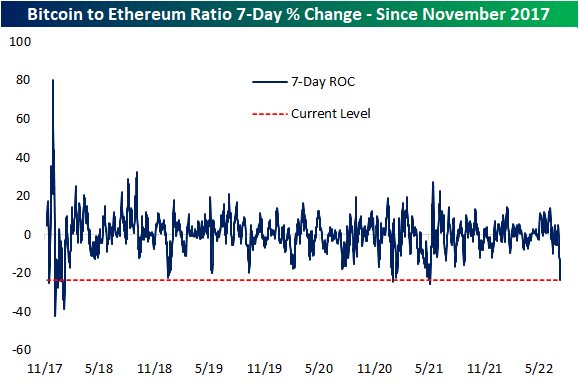 Below we show the performance of Bitcoin and Ethereum during each one of those one week declines of at least 20% in the ratio without another occurrence in the prior three months.  This most recent drop in the ratio is only the sixth time such a move has occurred. Performance this time around has been middling relative to these other instances with Ethereum’s 43.9% rally through yesterday when the ratio crossed the 20% decline threshold roughly inline with the median performance of other instances (43.4%).  Bitcoin on the other hand has actually been doing a little better with its 12.6% rally larger than the median of 9.8%.

As for where the two largest cryptos head from here, historical performance has been mixed. Overall Bitcoin has more consistently moved higher across the following year. One year out has perhaps been the period with the most dramatic outperformance of Bitcoin. Although it was only higher 60% of the time, Ethereum was only higher one year later once following the January 2021 instance. Click here to learn about Bespoke’s Weekly Crypto Report.