September has historically been a weak time of year for the stock market, but with the growing popularity of crypto-currencies, we wondered what the seasonal trends have historically been for bitcoin.  The chart below shows a composite of bitcoin’s median YTD performance over the last ten years for every day of the year.  Generally speaking, bitcoin has started off the year slowly.  Based on the last ten years, its median performance during the first quarter of the year has basically been flat but then starts to accelerate to the upside in Q2.  Strength has generally continued in the first half of Q3, but then the period from mid-August through mid-October has been the weakest time of the year when bitcoin’s median YTD change falls from over 120% to below 85%.  While Q4 has historically tended to start off slow, the year has typically finished on a high note with steady gains from late October through year-end. 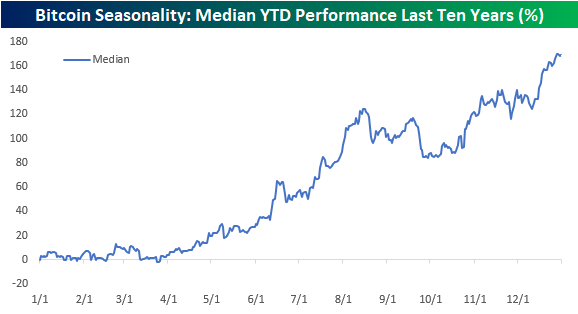 In terms of consistency, the chart below shows the percentage of time from every calendar day of the year that bitcoin has experienced positive returns over the following month (four weeks).  Historically speaking, from 2011 through 2020, bitcoin experienced positive one-month forward returns the most frequently right around tax day as it traded higher from 4/14 over the following four weeks in all ten years.  As for the current period of the year (second red dot in the chart), in the four-week period following 9/8, bitcoin has had positive returns 60% of the time. 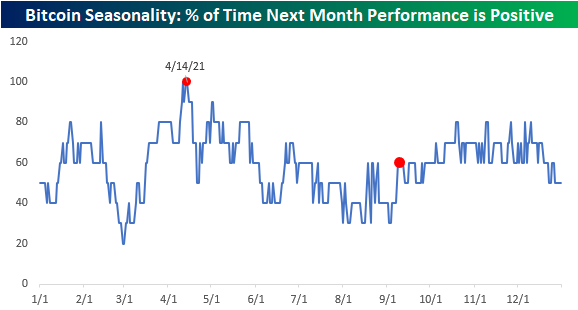 Whenever we discuss market seasonality, we always stress that historical patterns should only be used as a guide.  Just because something happened one way in the past doesn’t mean it will follow the same pattern in the future.  Along these lines, bitcoin’s performance in 2021 is a perfect example of not following the historical pattern.  The chart below is the same as the one above, but it also includes bitcoin’s performance so far in 2021.  Compared to the historical pattern, bitcoin’s performance in much of 2021 has been nearly the exact opposite.  Rather than starting off the year flat, bitcoin came out of the gate strong in 2021 and more than doubled before the end of Q1.  Beginning in mid-April, when bitcoin has historically seen the highest consistency of positive returns over the next month, its price peaked and quickly gave up most of its YTD gains.  In mid-July, bitcoin’s price finally bottomed out and started to rally right up through Labor Day weekend when it briefly traded above 50K before falling over 10%.  If there’s ever a time of year when bitcoin bulls don’t want bitcoin to follow the seasonal script, it’s the next few weeks.  Click here to view Bespoke’s premium membership options. 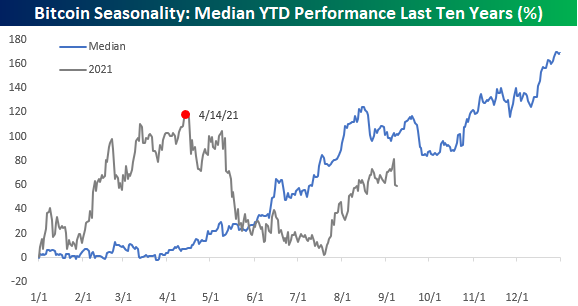