On the same day that Coinbase (COIN) is set to IPO, Bitcoin traded above $64,000 for the first time ever.  The leader in the cryptocurrency space has gone on a massive run over just the past few months having more than doubled just year to date.  Over the past year, bitcoin is up well over 800%. 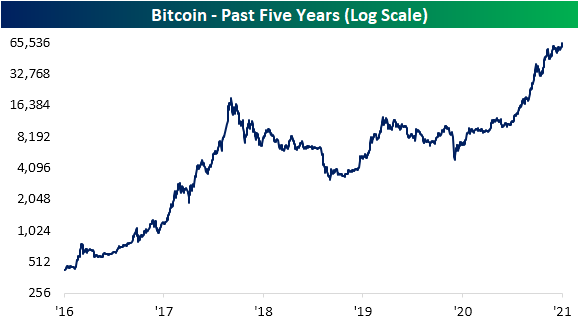 Those eye-popping returns in a relatively short span of time may seem like a bit of déjà vu from only a few years ago, but we would note that the comparison does not quite stack up. For starters, while Bitcoin has been a nine-bagger over the past year, the rate of change was much gaudier back in late 2017 when it rose upwards of 2,400% year over year by the time of its high around $19,000. 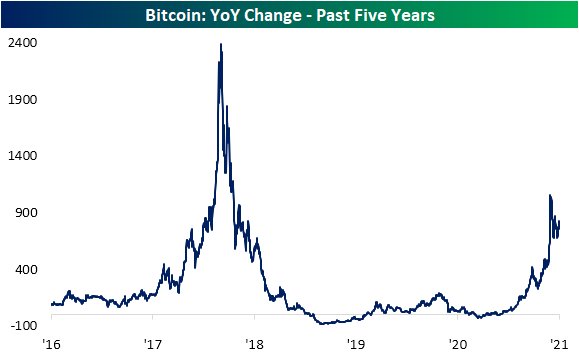 In the chart below we show the performance of Bitcoin in the year leading up to the December 2017 peak versus the run over the past year. Both runs are extremely impressive and at times have tracked each other fairly well, but there is one distinguishing difference.  In weeks leading up to the prior peak in 2017, Bitcoin went into orbit gaining over 240% from mid-October to the December high. By comparison, Bitcoin is up only around 30% from mid-February through today. 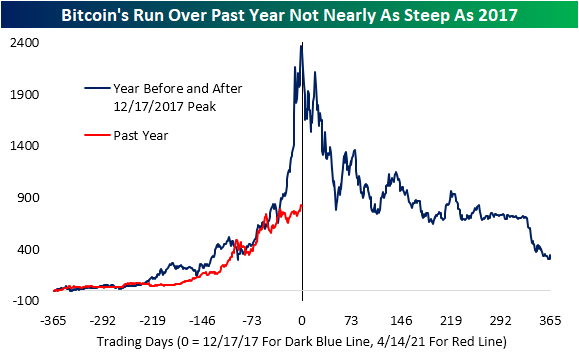 In addition to the move having been smaller recently, Bitcoin also appears to have seen interest fall off. As shown below, Google Trends data showing searches for “Bitcoin” peaked in late 2017 at the height of the crypto craze as people rushed to learn about the asset. Search interest has been mostly muted since then, but it did pick up within the past several months.  Bitcoin is on the tips of more tongues today especially given the direct listing of Coinbase (COIN), but Google searches for the crypto are still well below the highs from a few years ago and are even well below the more recent peak from the start of this year. In other words, from a sentiment perspective Bitcoin appears to be less of a frenzy now than it has been in the past. Click here to view Bespoke’s premium membership options for our best research available. 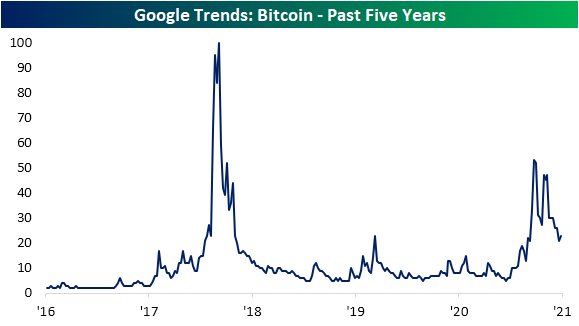