Bitcoin Hangs on to 30K

It has been a roller-coaster ride for bitcoin today.  After breaking below $32K, then $31K, $30K, and $29K all within a matter of hours, buyers stepped in and prices rebounded back above $32K.  Over the course of the day, bitcoin prices were down over 11% versus the prior day’s close but have rebounded more than 14% off the intraday lows.  A 10% intraday decline coupled with a 10% intraday bounce is practically unheard of in the equity markets, but for bitcoin, it has become increasingly common.  This year alone, today’s reversal marks the fifth such intraday rebound of 10%+ following a 10%+ intraday decline, although it only happened twice in 2020 and three times in 2018.

As far as bitcoin’s price chart is concerned, today’s bounce represents another in what is becoming a long list of testing the $30K level. It happened twice back in January before bitcoin rocketed above $60K and has now happened four times since prices started to fall in early May.  When it comes to technicals, the more often a security tests support or resistance, the weaker it is considered to become.  If that holds true with bitcoin, a few more tests of that level in the short term could open the floodgates to the downside. 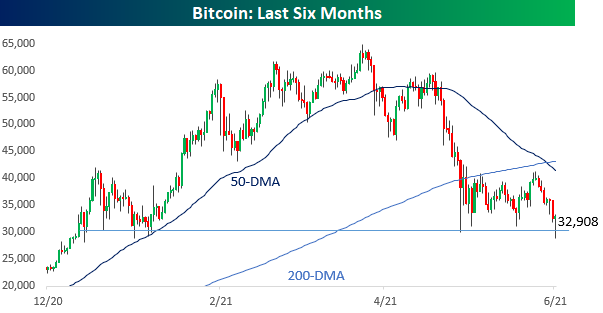 Even after today’s bounce in bitcoin, its price is still over 48% below its all-time high reached just over two months ago in mid-April.  While 48% sounds pretty steep, it looks like a walk in the park compared to prior drawdowns. Following peaks back in early 2011, early 2013, late 2013, and late 2017, bitcoin’s price fell anywhere from 70% to 93% each time.  Even more surprising is the fact that since the start of 2011, bitcoin’s average percentage spread between its closing price on a given day and the all-time high as of that date was 48% – which is right where it is now. Click here to view all of Bespoke’s premium membership options and sign up for a trial. 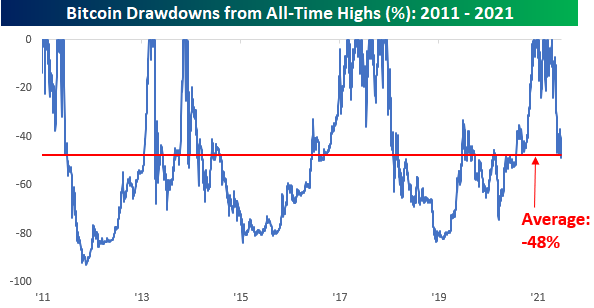