Bitcoin Going for the Gold

Topping the big gains in US equities since the election may sound like a tough task, but bitcoin has been up to the challenge.  Since Election Day, bitcoin has now rallied more than 14% taking its price further outside of the upwardly trending range it has traded in for most of the last year.  Outside of the last week, the only other time that bitcoin has deviated from its one-year range was at the depths of the COVID crisis back in the spring.  The break of the trend back then proved to be short-lived, so we’ll see if this most recent breakout has staying power or ultimately loses steam.  For reference, a retracement back into its prior range would take prices back down to $13,000 from the current level of $15,700. 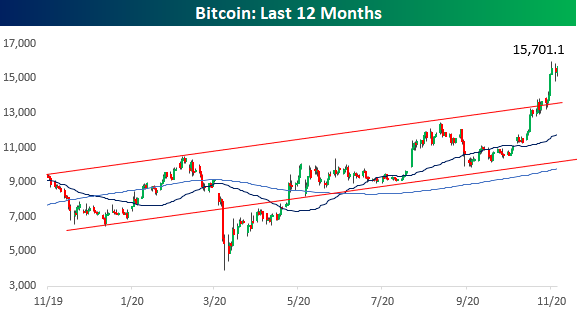 One chart we like to keep tabs on is the ratio of bitcoin to physical gold.  Both assets are essentially considered stores of value, so it’s interesting to see how accepting investors become of ‘digital gold’ over time.  Obviously, there are a lot of other factors at play that impacts both assets, but the chart below provides a rough approximation. At current levels, one bitcoin will buy about 8.5 ounces of gold.  That’s not far from the most recent peak of just under 9.0 back in July 2019.  If and when the ratio breaks above that level, the next level to watch would be the record high of 14.8 in December 2017.  Based on gold’s price now, that would translate to a price of about $27,500.

While there are plenty of arguments to be made in favor of the long-term prospects for bitcoin, we would note that even for a volatile asset like bitcoin, the rally of the last week or so has been on the extreme side.  Just last week the ratio between bitcoin and gold was around 7.5, but in the span of a week, one bitcoin will buy once ounce more gold than it did just last week. Click here to view Bespoke’s premium membership options and sign up for a free trial. 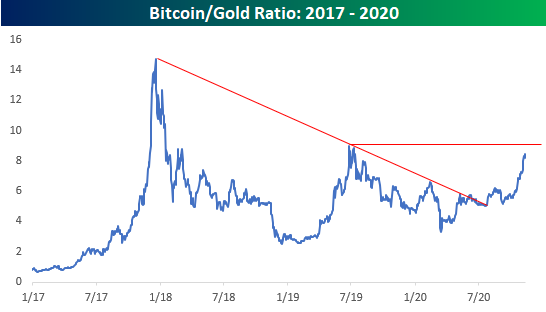