Like just about all other risk assets this week, it’s been a rough one for bitcoin.  As of Friday morning, the world’s largest cryptocurrency was trading down over 7% to the low $54K range.  After taking out its spring highs in late October and then making a higher high in November, bitcoin has seen a sharp and swift pullback in the last few weeks falling nearly 20%.  Even after the current pullback, the uptrend from the summer lows for bitcoin remains intact as a break of that trendline wouldn’t come into play until around the $50K level. 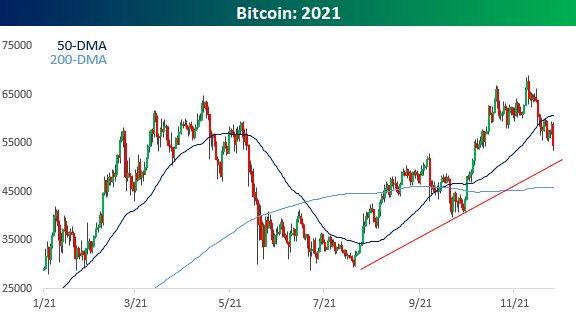 As anyone even paying some attention already knows, volatility is no stranger to bitcoin.  While the current pullback is nearing the 20% threshold, in the last year alone, bitcoin has seen a number of pullbacks from record highs of similar or even greater magnitude.  As shown in the chart below, if the current pullback reaches the 20% threshold, it would be the fourth pullback of that magnitude or more from a record high in the last twelve months. Of those three prior pullbacks, the first two bottomed out at declines of less than 25%, but the most recent was much deeper as bitcoin was more than cut in half from its April closing high to its July closing low.  Click here to view Bespoke’s premium membership options. 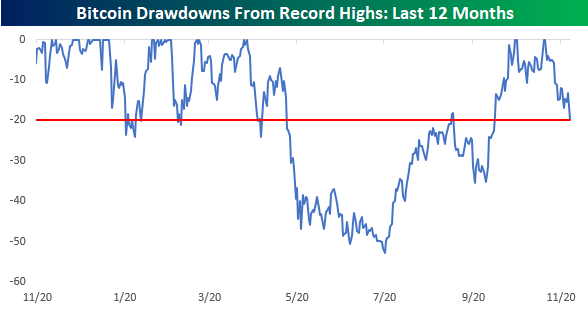