As we noted yesterday, the Consumer Discretionary sector (XLY) was the first and only sector above its 2/19 levels (date of the last all-time high for the S&P 500).  But with further gains yesterday, Technology (XLK) is looking to join XLY in moving above its 2/19 levels.  On a closing basis, XLK finished yesterday $0.15 above its last all-time high. While the ETF has broken out slightly, the same cannot be said just yet for the S&P 500 Technology index that the ETF tracks which finished yesterday still 0.2% below its highs; the closest to its 2/19 high of any sector excluding Consumer Discretionary. Communication Services, Materials, and Health Care are likewise within tangible reach of their prior highs. 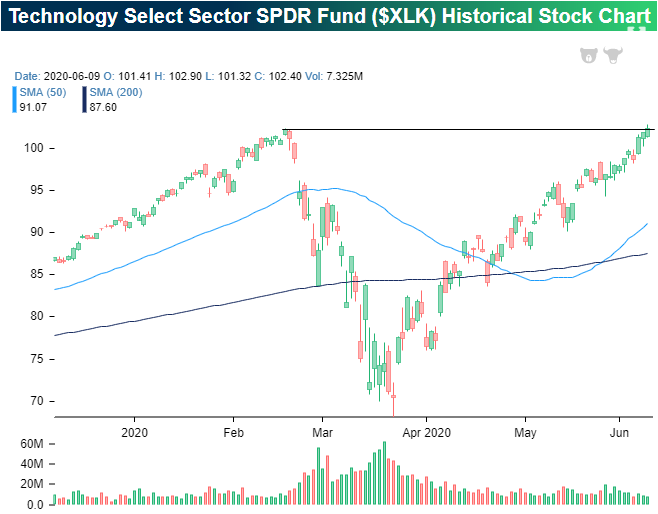 Within the Tech sector, there are several stocks that have begun to break out as well. As shown in the charts below from our Chart Scanner, there are some like Apple (AAPL), Adobe (ADBE), Microsoft (MSFT), OneSpan (OSPN), and Texas Instruments (TXN) that have broken out to or are very close to new 52-week highs after taking out their highs from earlier this year within the past several days.  Though they are not at 52-week highs, there are others like Advanced Micro Devices (AMD) and Hewlett Packard (HPE) which are experiencing other types of breakouts.  For AMD, the stock was quick to recover most of its 2/19 to 3/23 losses retesting those prior highs as early as mid-April, though, it had done so unsuccessfully. Ever since AMD has been in a short term downtrend as Tech shifted from a market leader to somewhat of a laggard in the past month.  But surging 6.5% yesterday and another 2.87% today, the stock has broken that downtrend. HPE on the other hand had peaked last fall with losses accelerating during the bear market. Since March, the stock has not shared the massive recovery of other stocks as it has consolidated between roughly $9 and $10.5. In just the past week, though, HPE has managed to break out above this range.

As previously mentioned, AAPL has experienced a significant breakout in the past week and the same can be said for other mega-cap stocks as well.  Of the FAANG stocks, Amazon (AMZN) also broke out (again) yesterday to its own 52-week high.  Facebook (FB) has nearly done the same after successfully retesting former resistance around $223 in the past couple of weeks. At the same time, Netflix (NFLX) has held up at its 50-DMA while Alphabet (GOOGL) has moved back into its range from earlier this year leading up to its 2/19 high. Click here to view Bespoke’s premium membership options for our best research available. 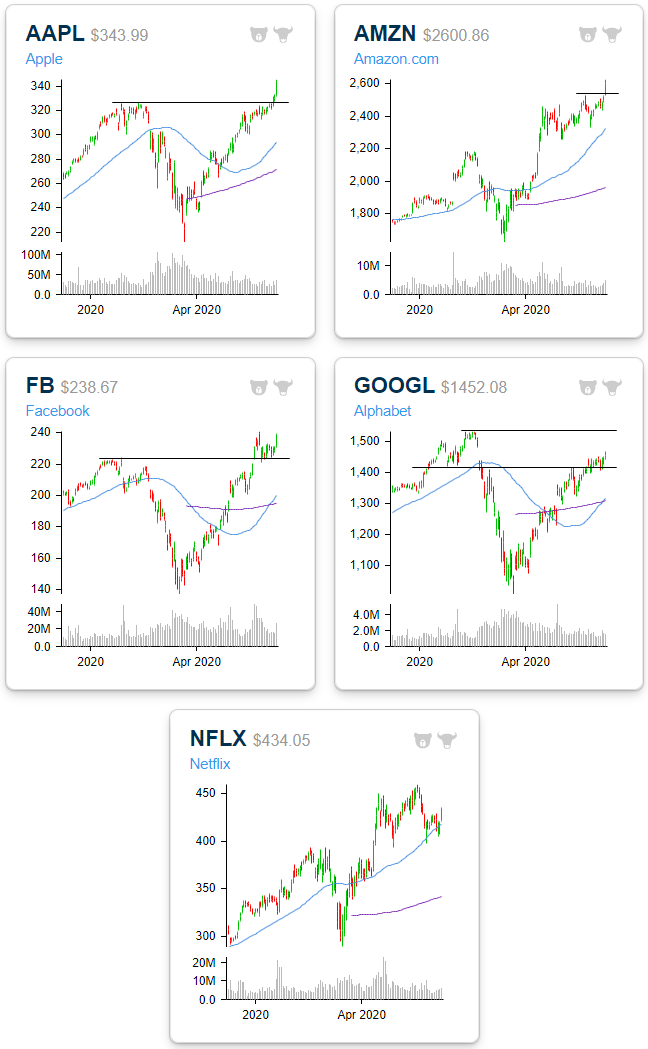