This week’s initial jobless claims came in at 216K which was slightly above expectations of 215K.  That leaves claims basically in the middle of the past year’s range although it is an improvement from last week’s revised number of 223K.

Given they remain in a range, the revision to last week’s print was one of the more notable aspects of this week’s data. Originally, last week’s seasonally adjusted number was much stronger at 211K, but that was revised 12K higher to 223K. While that does not leave claims significantly higher than any of the past year’s readings—it was the highest since the last week of December’s equivalent reading—the size of the revision was very large.  The chart below shows the difference between the first revision and the first release of jobless claims over the past 20 years. Last week’s 12K revision was the joint largest revision since the 12K upwards revisions in December and November of 2012. Before that, you would have to go back to March of 2012 to find a larger revision (16K). While those are big, there were multiple revisions that were ever larger like the 27K revision in January of 2012, 26K revision in September of 2005, 33K revision in March of 2002, and 26K revision in December of 2000. 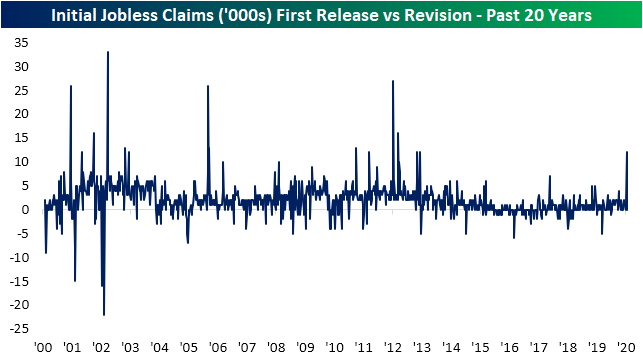 Despite that upward revision, the four-week moving average has fallen for a fourth consecutive week. Now at 214.5K, it is at its lowest level since early October when the moving average was 213.75K. 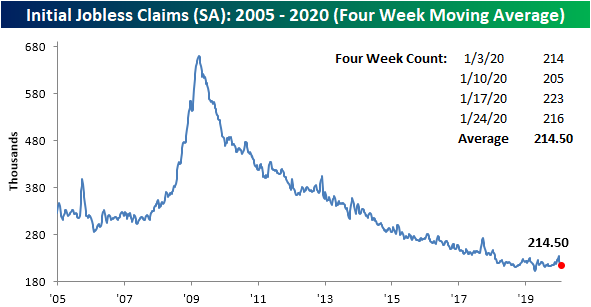 In terms of the non-seasonally adjusted data, claims are continuing to work off of their seasonal peak, falling to 228.4K this week from 282.1K last week.  Given that the data is non-seasonally adjusted those week to week comparisons do not mean much and a better look is through the year-over-year change. By this measure, claims fell 22.4K YoY.  Start a two-week free trial to Bespoke Institutional to access our interactive economic indicators monitor and much more. 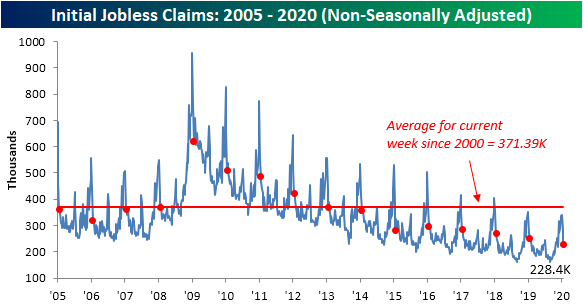