Within the US equity market, we’ve seen some major moves in individual stocks off their 52-week lows over the last few months.  Look at the table below.  Within the Russell 1000, which tracks the performance of the largest companies in the US, stocks in the index are up an average of 87.6% from their respective 52-week lows.  Looking at performance by individual sectors, stocks in the Energy sector are up an average of 136.8%, while the average Consumer Discretionary stock has rallied 131.4%.  The Technology sector wasn’t hit nearly as hard by the Covid-crash as other sectors, but stocks in the sector have doubled on an average basis relative to their 52-week lows.  The only sector where stocks are up less than 50% on an average basis from their 52-week lows is Utilities at 46.33%. 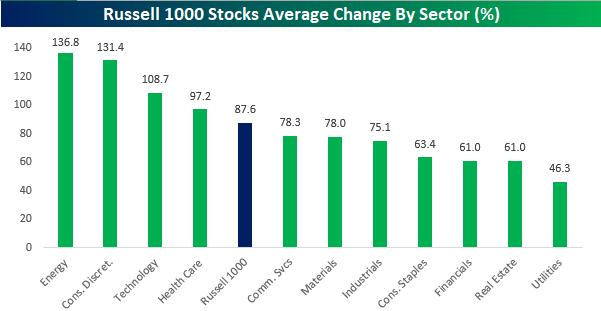 For many investors, the holy grail of stock picking is the proverbial ten-bagger.  A ten-bagger is a stock that multiplies by ten times its original price.  Usually, this happens over the span of years, but in the Covid-economy, we’ve actually seen a number of these ten-baggers play out in the span of months.  While most of these examples are in the small-cap space, shares of Wayfair (W), which has a current market cap of $27.5 billion, have rallied from $21.70 on March 19th to its current price of $290.85 now.  That’s a gain of more than 1,200% in less than five months!

Within the entire Russell 1,000, 257 stocks have at least doubled off their 52-week lows, and in the table below we highlight the 34 stocks that are at least a quarter of the way to the ten-bagger club and have rallied more than 250%.  As mentioned above, W tops the list, but Fastly (FSLY), which has barely been public for a year, is just shy of the club with a gain of 992%.  Behind FSLY, Livongo Health (LVGO) is up 855%.  Given that LVGO just got a takeover offer from Teladoc (TDOC), the 11th best-performing stock on the list, it may only make the ten-bagger club under the banner of the TDOC ticker.

In looking through the list of stocks shown, many of these names come from the Health Care, Technology, and Consumer Discretionary sectors and have been direct beneficiaries of the new Covid-economy.  At the same time, six stocks from the Energy sector made the list as well as they recovered from their bombed-out levels after oil prices briefly traded in negative territory earlier this year.  Like what you see?  Click here to view Bespoke’s premium membership options for our best research available. 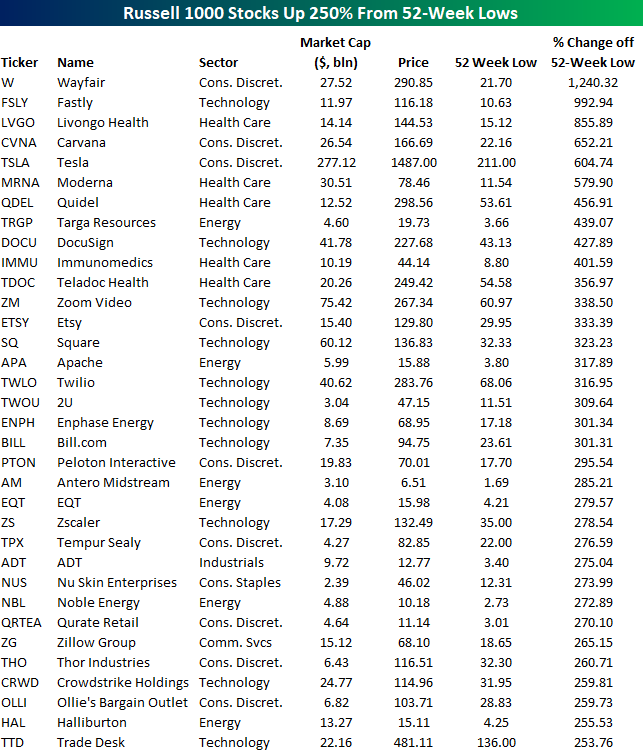