It’s the way things always work out in the market. Just when everyone starts to think one thing, the complete opposite occurs. It happened in the US Treasury market yesterday when the yield on the 10-year traded down near 2.5% prompting some sell-side firms to suggest a move to 2% was in the cards.  24 hours later, though, yields have reversed higher, and at just under 2.8%, the 10-year yield is now closer to 3% than 2.5%.  After starting out the week with a rally of 2.22%, the iShares 20+ Year US Treasury ETF (TLT) pulled back over 2% Tuesday. You may be used to back-to-back 2% moves in the stock market, but they’re much less common in long-term US Treasuries.  Before this week, the last time TLT had 2%+ daily moves on consecutive days was all the way back in March 2020 at the depths of the COVID crash, and since TLT was launched in 2002, there have only been 16 other periods where the ETF had back-to-back moves of 2%.  Of those, just six went on for a third day, and only two of those (both in March 2020) went on to more than three days. Click here to learn more about Bespoke’s premium stock market research service. 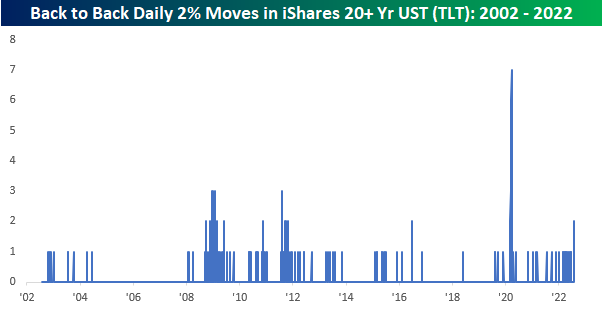 The red dots in the chart below show every time that TLT had a 2%+ daily move on back-to-back days. Of the prior occurrences, the majority all took place during and in the year or two after the Financial Crisis, but besides that, the only other occurrences were in June 2016 (Brexit) and the COVID crash. We probably don’t need to spell it out, but prior back-to-back 2%+ moves in TLT have occurred during periods of short and/or long-term stress in the markets. Click here to learn more about Bespoke’s premium stock market research service. 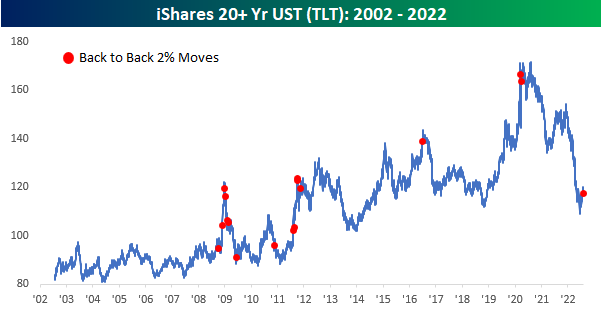 It isn’t just individual days where Treasuries have experienced volatility lately.  TLT’s average daily move over the last 50 trading days has now moved to above 1% (red line), and since its launch in 2002, the only periods where its average daily move was higher was during the Financial Crisis (Q4 2008 through Q4 2009), after the US debt downgrade (Q3 2011 to Q1 2012) and during the COVID crash (Q1 2020). If you were looking for an August slowdown, Treasuries don’t look like they’re ready to chill. 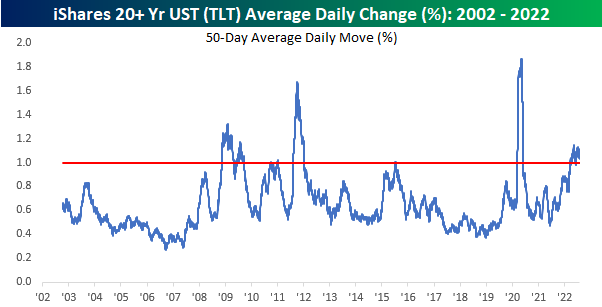