Big Gap Down For Ford (F)

As Tesla’s (TSLA) meteoric rise has been in the spotlight this week, another US automaker is moving in the opposite direction.  Although it highlighted plans to attempt to breach into the electric vehicle market as the company’s future, Ford (F) reported a disappointing quarter after the close yesterday. Revenues came in at $39.7 bln which was handily above estimates of $36.5 bln, but also down 5% compared to the prior year.  Wholesale units sold for 2019 totaled just 5.386 million compared to 5.982 million in 2018 as market share fell from 6.3% to 6.0%.  Additionally, EPS missed estimates by 5 cents as the company continues to try to cut costs and reiterated plans to close six European plants. Perhaps the biggest disappointment in last night’s report was the guidance.  The company is now forecasting full-year 2020 adjusted EBIT of $5.6 bln to $6.6 bln compared to analyst estimates of $7.37 bln. Given these results, the stock gapped down over 8% this morning. This would bring the stock to its lowest level since the end of October and would be the largest gap down the stock has experienced in reaction to earnings since at least 2001 as shown in the snapshot of our Earnings Explorer below.

If it is any consolation, the fourth quarter has historically experienced the weakest stock price performance for Ford (F) in reaction to earnings. It is the only quarter’s report where the stock has averaged a gap down at the open, and in terms of full-day reactions, F has been higher only 28% of the time following its Q4 report.  As a result of today’s losses, Ford’s (F) already high dividend only lifted higher.  Ford shares now yield well above 7% compared to ~6.5% as of yesterday’s close. So, in addition to having the lowest share price in the index, F now also has one of the highest dividend yields in the S&P 500.  Start a two-week free trial to Bespoke Institutional to access our interactive Earnings Explorer, Chart Scanner, and much more. 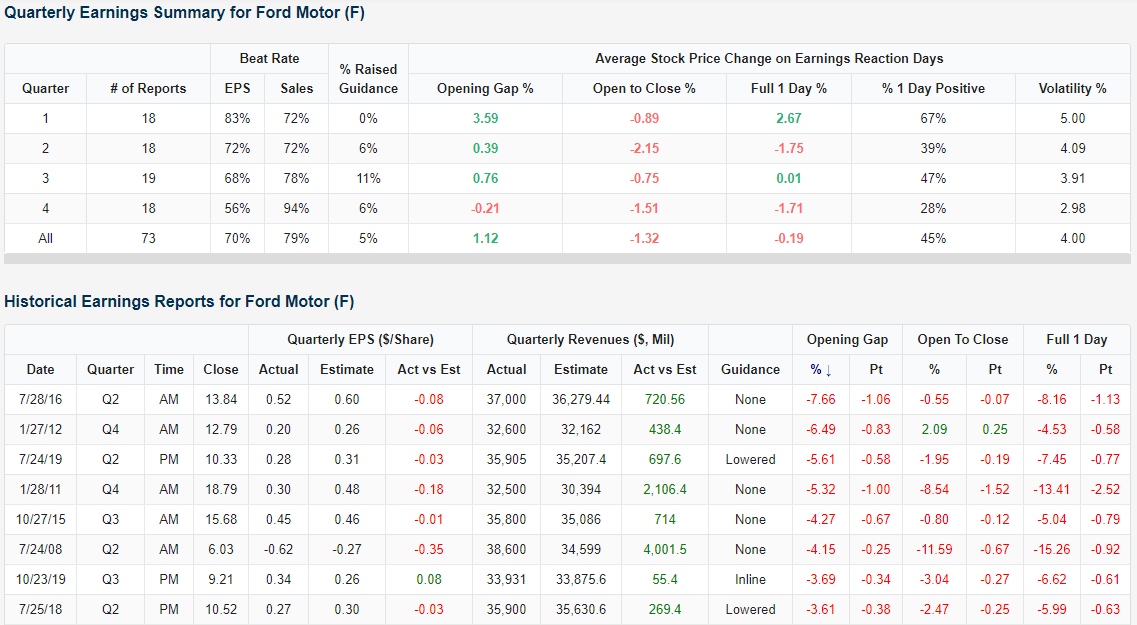