Predicting economic data has been difficult in the post-pandemic era, but economists have had a particularly difficult time trying to forecast the monthly number of jobs created in the US economy.  This Friday’s Non-Farm Payrolls (NFP) report was a perfect example.  While economists were expecting growth in payrolls of around half a million, the actual reading came in much weaker at 199K.  December’s whiff wasn’t just a one-off either.  Last month, economists were even further off the mark when actual payrolls in November came in 340K below forecasts.  Since the pandemic really started to impact the economy in March 2020, the monthly NFP has been more than 100K off the mark in 17 out of 22 months, or 77% of the time.  Prior to the pandemic, meanwhile, NFP forecasts were only off the mark by more than 100K less than 20% of the time.

Another way to highlight just how difficult it has been for economists to forecast the monthly number of jobs created in the US economy, in the chart below we compare the average spread between actual and estimated monthly payrolls from 1998 through 2019 versus the spread for each month in 2021.  For this analysis, we left out 2020 as the magnitude of the disruption to the economy was. admittedly, impossible to predict.  Even in 2021, though, the only month where economists were closer than average to predicting the actual number of jobs created was for the January 2021 report where the consensus forecast was less than 60K off the initially reported level of payrolls.

As the start of the pandemic moves further back in the rearview mirror, it should become easier for economists to gauge the performance of the economy, but as 2021 has shown us, there’s still plenty of room for improvement.      Click here to view Bespoke’s premium membership options. 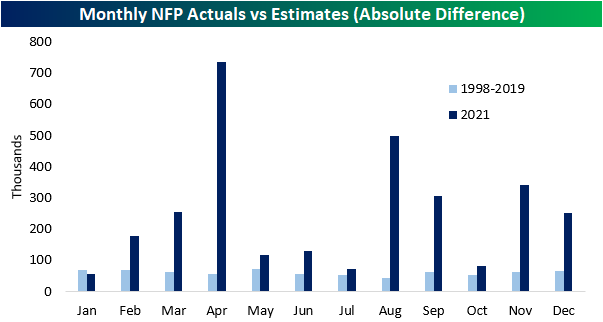