Big Business No Longer A Problem For Small Business

As we noted in an earlier post, the NFIB’s monthly survey of small businesses showed overall strong labor market conditions with some signs of improving labor market tightness in October.  As shown below, a combined 34% of respondents reported either costs or quality of labor as their biggest issue.  That was down 6 percentage points from the record high last month. 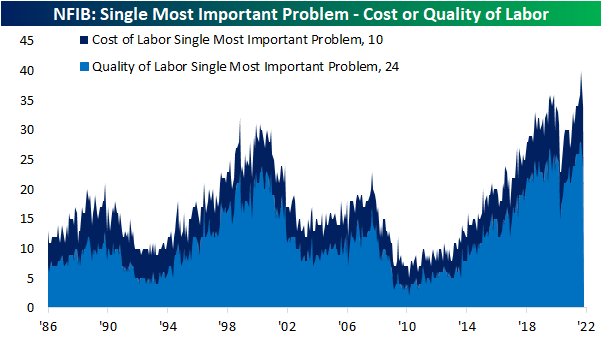 In the table below, we show the full range of problems that the NFIB surveys small businesses on.  While both labor-related problems fell, there was a bigger decline in quality of labor which is now back below a quarter of all respondents.

Concerns appear to have moved away from labor and toward inflation.  The percentage of businesses seeing inflation as their biggest problem has been elevated at levels unseen since the Financial Crisis over the past several months, but there was an improvement in September.  In October, it gained back all that decline and then some as 16% of businesses reported inflation as their biggest issue. That leaves it at the same level as November 2008. 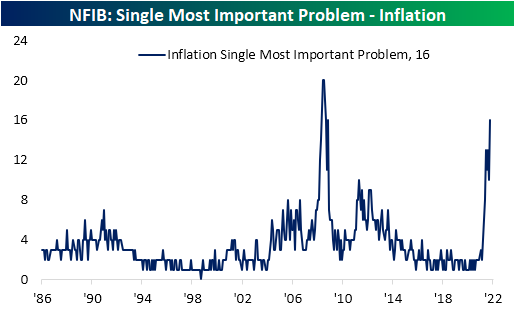 Perhaps one of the most interesting findings of the October report concerned the battle of small vs big business.  In fact, there no longer appears to be any battle.  For the first time on record, zero percent of respondents reported competition from big business as their biggest problem. 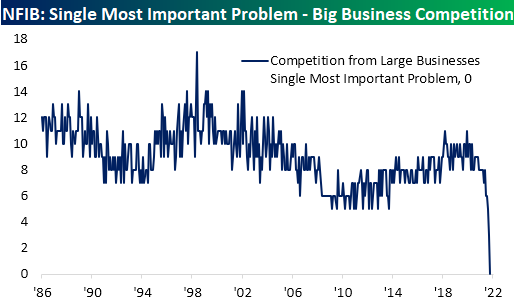 On a combined basis, the percentage of respondents reporting government requirements or taxes as their biggest problems remains the most pressing issue behind labor concerns. Businesses did report improved uncertainty regarding economic policy.  As shown below, that index fell sharply to 67 in October, which is now the lowest reading since the start of 2016.  Click here to view Bespoke’s premium membership options. 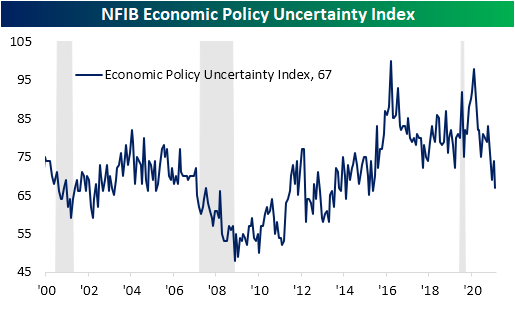