Of the stocks that have skyrocketed in the last few weeks, there is one that might come as a surprise: International Business Machines (IBM).  This left-for-dead technology giant reported earnings on January 21st with strong results. Big blue reported an earnings triple play with EPS 2 cents above estimates, sales $155.1 mm above estimates, and raised guidance.  The stock rose 3.39% in response, but in the following days, those gains did not hold.  Fortunately for IBM, its recent earnings report is not the only reason it has been in the news lately.  Less than a week ago, the company announced that the president and CEO of the past eight years, Ginni Rometty, will be stepping down in April. This resulted in the stock jumping over 5% last Friday with considerable follow-through since then. As of today, IBM has risen 11.75% from the close prior to its earnings report and 13.72% since the CEO announcement, taking out previous highs from the fall. 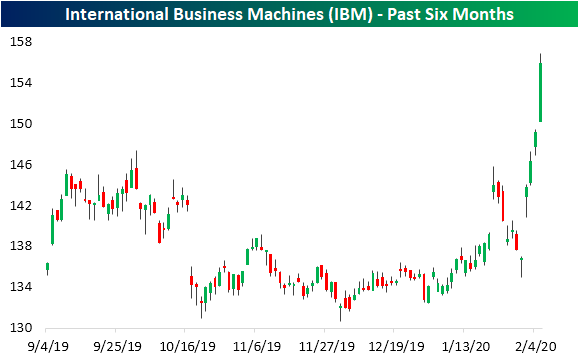 Not only has this move taken out late September/early October highs, but it has also brought the stock to fresh 52-week highs as shown in the chart below.  Today’s further gain of another ~5% leaves IBM around 3% above the July high of $151.36. 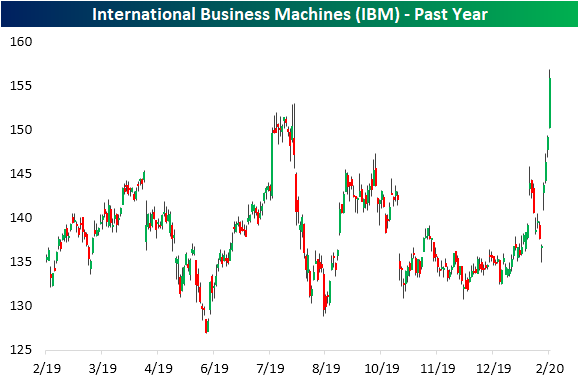 While IBM has broken out on a shorter-term chart, the technical picture over the long run is at more of a crossroads.  For much of the past decade, IBM has been stuck in a prolonged downtrend. The run-up over the past couple of weeks has brought IBM right to the top of resistance at this downtrend line. A breakout above this line would be a promising sign.

At the same time, the fundamental picture still is attractive relative to its peers.  IBM currently has one of the lowest valuations and highest yields of the S&P 500’s Technology sector stocks.  Currently trading at 11.96x earnings, IBM is deeply discounted when compared to the average P/E for the sector of 41.8.  Additionally, even with the recent move, IBM yields 4.14%, which is second only to Seagate Technology’s (STX) 4.74% yield, which is the highest in the sector. 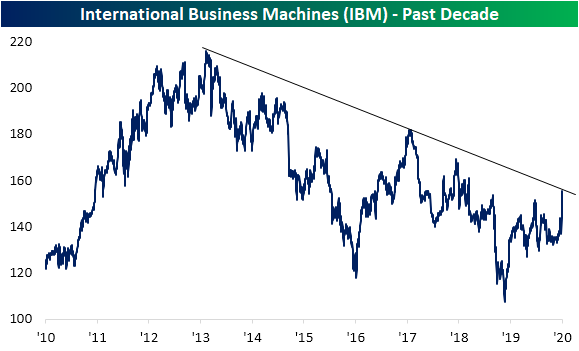 Again, in spite of its low valuation, IBM is very overbought. Thanks to the over 10% rally in the past five days, IBM has now moved over 4 standard deviations above its 50-DMA, meaning it could be due for some mean reversion.  Looking back through the stock’s history, there have only been 14 other times that it has risen over 10% in a five-day span without having done so in the prior year.  After prior 10%+ rallies in the span of 5 days, the stock has averaged a decline of 0.86% over the next week.  Over the next year, however, IBM has averaged a gain of 12.6%.  Start a two-week free trial to Bespoke Institutional to access all of our premium research and interactive tools. 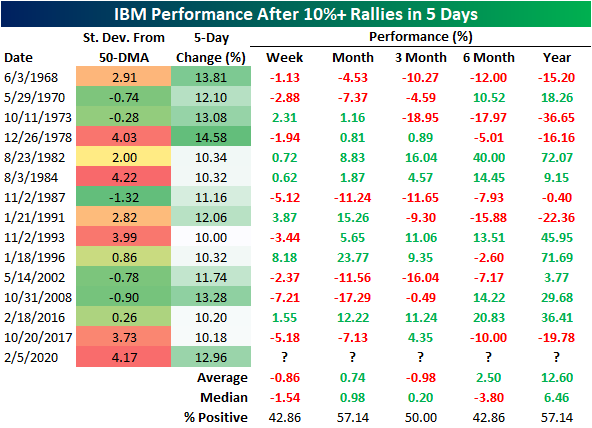