Biden: An Above Average President?

As President Biden concludes his first year in office, we took a look at the performance of the Dow Jones Industrial Average during his presidency thus far. Compared to previous administrations since 1900, performance during Biden’s first year in office has exceeded the historical average by just under two percentage points (12.3% vs 10.4%). In the chart below, it would appear as if Biden’s first year in office was more volatile than it was under previous administrations, but that’s because we’re comparing a single year to an average. In looking at the median absolute daily change under Biden, it was actually quite similar to prior administrations (46 bps vs 47 bps). Even though the Biden administration had a tough start, the Dow was able to recoup all of its initial losses rather quickly and booked a solid first-year return when all was said and done. 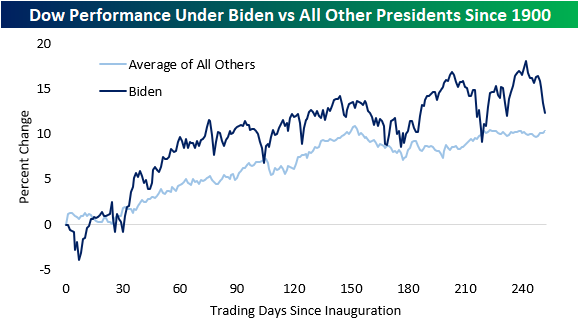 Although a strong historical reading, the Dow’s performance during Biden’s first year in office underperformed the first year of the previous two administrations, and Biden ranks ninth versus all other Presidents in first-year performance since 1900. On a median basis, the Dow has outperformed by seven percentage points. Historic first-year returns vary greatly, and the standard deviation for this data set is astoundingly high at 24.7 percentage points. Historically, when the Dow appreciates by over 10% during a President’s first year in office, the average annualized return for the remainder of the Presidency is 5.0% (median: 5.7%), which is about 40 basis points above the average of all periods but below the median. 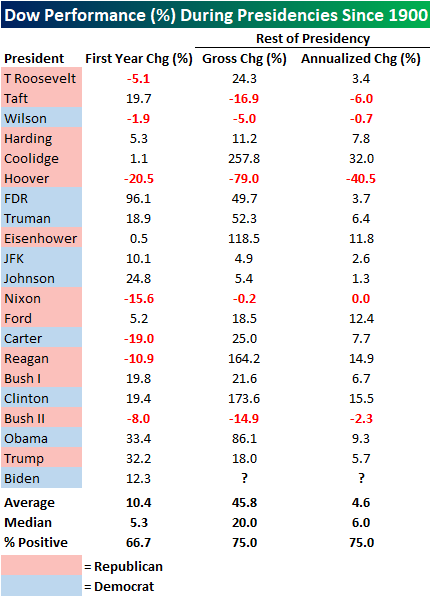 In addition to the Dow underperforming the last two administrations under Biden, the index has underperformed relative to the median for all Democratic Presidents since 1900 by 6.6 percentage points. Historically, the first-year performance under Democratic leadership tends to be significantly higher than first years under Republican leadership (18.9% vs 0.8%). However, Republican Presidents tend to have higher annualized returns for the remainder of their Presidencies when looking at the median (6.2% vs 5.0%). Stay on top of market trends by becoming a Bespoke subscriber today.  Click here to view Bespoke’s premium membership options.