The market started off November on a positive note, and even after the election has continued to add to its gains.  Through the close today (11/24), the S&P 500 is up 7.90% since the close on Election Day.  Relative to every other Presidential election since the beginning of the S&P back in 1928, the three-week performance of the S&P 500 following this Election Day ranks as the second-best of all time.  It came down right to the wire, but the only other US President to see a stronger market reaction to their election (or re-election) was Ronald Reagan in 1980 (7.97%). Behind Reagan and Biden, the only other Presidents where the S&P 500 experienced an upside move of 5%+ in reaction to their elections were Hoover in 1928 and Clinton in 1996.

On the downside, the most negative reaction of the market in the three weeks after Election Day was the 14.75% decline following President Obama’s election in 2008.  In addition to Obama, the S&P 500’s four other three-week downside moves of more than 5% came after the elections of Truman in 1948, the election of George W Bush in 2000 (although at the time it was unknown who was the winner of that election), the election of Franklin D Roosevelt in 1932, and Dwight D Eisenhower’s re-election in 1956. 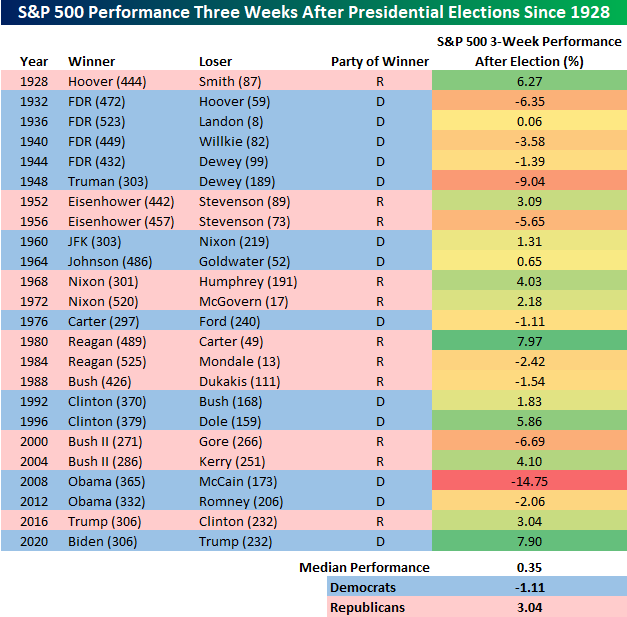