While it was not a member of the S&P 500 at the time of the COVID crash, being added on 12/21/20, Tesla (TSLA) is currently the S&P 500 member which has risen the most since the broader market low. After being more than cut in half, it has since risen over 1,000%.  The next best performers are Devon Energy (DVN) and APA Corp (APA); a couple of Energy sector names that saw even larger declines of 72.8% and 84.86%, respectively from 2/19/20 to 3/23/20.  Along since Freeport-McMoRan (FCX), both stocks have risen well over 800% over the past two years. Of the list of the 25 best performers in the S&P 500, the only one that managed to move higher during the COVID Crash was vaccine producer Moderna (MRNA) which had risen 40.43% as the rest of the market collapsed. 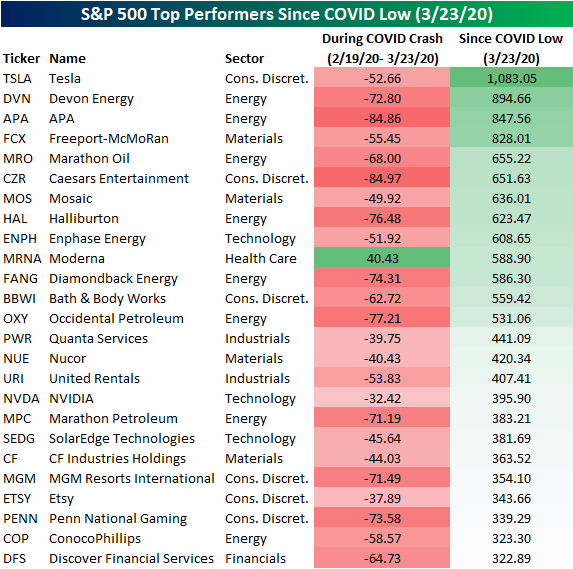 By the time of the 3/23/20 low, the index’s worst performers since the pre-pandemic high (2/19/20) had seen monumental declines with many of those stocks dropping over 70%. On the other end of the spectrum, only four stocks had eeked out a gain and only another seven stocks had fallen single-digit percentage points.

As for what those stocks have done since then, below we have created equal weight indices comprised of the S&P 500 members that are still actively traded that were the 20 best and 20 worst performers from 2/19/20 to 3/23/20. Each basket as well as the S&P 500 are indexed to 100 at the COVID Crash low.  As shown, what had at one point been the most beaten-down names, have crushed it over the past two years; hypothetically having turned $100 into $481 having even held up well during the recent bout of weakness for equities.  For comparison, the biggest winners in the early days of the pandemic bought at the lows would have only seen $100 turn into $137.64 while the S&P 500 as a whole would have a little more than doubled.Click here to view Bespoke’s premium membership options. 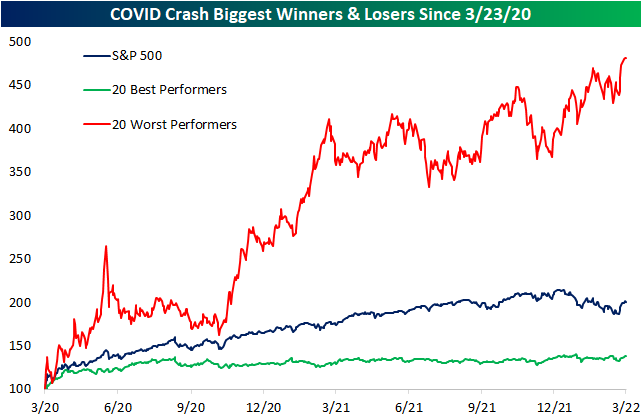