On Monday we published our asset class performance matrix showing total returns for key ETFs since Election Day 2016 (11/8/16).  Today we wanted to highlight the individual stocks traded on US exchanges that have performed the best and the worst since President Trump surprised the world with a victory over Democratic candidate Hillary Clinton.  First off, below is a chart showing the average performance of stocks in each S&P 500 sector since Election Day 2016.  (These are based on stocks currently in the index and not as the index stood on 11/8/16.)

The Energy sector stands out like a sore thumb in the chart below. While every other sector has at least averaged double-digit percentage gains, the stocks in the Energy sector are down an average of 52.3% since Trump was elected!  Other sectors that have been weaker than the broad market include Real Estate, Consumer Staples, and Financials.

If you were to ask most people back in November 2016 which areas of the market should outperform under Trump and which should underperform, you’d likely see results that are the exact opposite of what has actually happened.  Sectors like Energy, Real Estate, and Financials would have been expected to benefit from Trump since those are the industries he’s most associated with, while Tech is a sector that’s usually expected to benefit more when the Democratic party is in control. 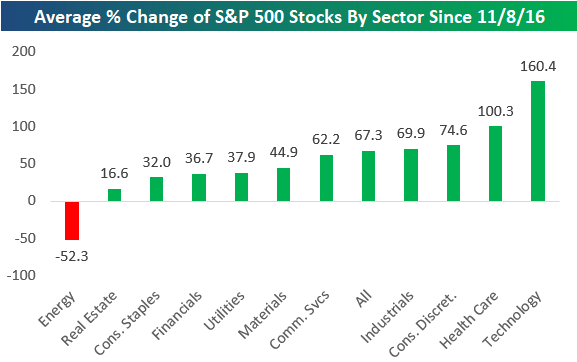 While there are 46 stocks in the S&P 500 up more than 200% since Election Day 2016, there are 32 stocks that are down more than 50% over the same time frame.  The Energy sector is the most represented on this list by far with 14 stocks overall and 10 of the worst 11!  The only non-Energy stock in the top ten is General Electric (GE), which is down 76% since Trump was elected.  Other notable losers include airlines and cruiselines like AAL, CCL, and NCLH, and consumer stocks like TAP, KHC, UAA, WBA, and LB.

General Electric (GE) and Exxon Mobil (XOM) are the two names that stand out the most.  Each of these stocks were at one point in time the largest company in the world, but they’re both now shells of their former selves with huge losses over the last four years.  Remember these two examples when you’re looking at the largest companies in the world right now.  Chances are a few of them will experience similar fates as GE and XOM over the next ten to twenty years.  Click here to view Bespoke’s premium membership options for our best research available. 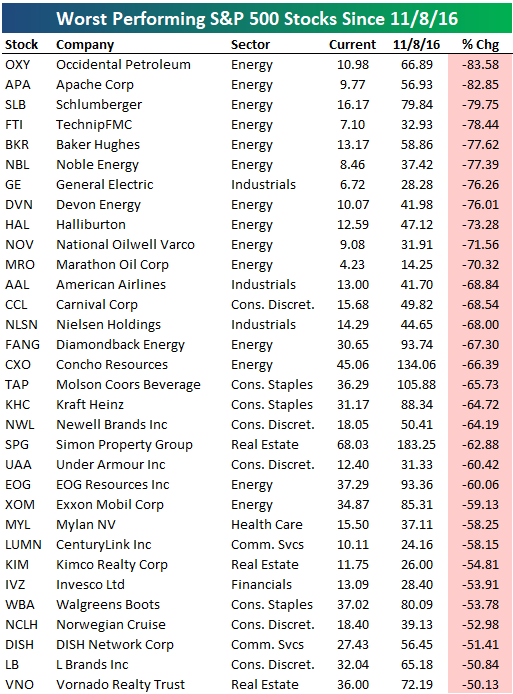