The past month has seen the S&P 500 pivot and rally higher after declines throughout the month of September.  Since the end of Q3, the S&P has now gained 8.6%, which is slightly off the highs from earlier this month.  Earnings season has been in full swing over the past few weeks meaning there have been plenty of stocks with catalysts for big moves since the end of September.  Below we show the stocks that have risen and fallen the most since September 30th.

Topping the list is Enphase Energy (ENPH) having rallied 67.77% in the past month and a half. The bulk of that gain came after earnings as the stock leaped 24.65% the day after reporting and plenty of follow-through in the days after. Arista Networks (ANET) is also up over 50%. Like ENPH, a large portion of ANET’s move came from an over 20% gain on earnings in response to a triple play. There are 18 other stocks in the S&P 500 that have risen by more than 25% since the end of September. The largest of those are NVIDIA (NVDA) and Tesla (TSLA).

Only 18% of the S&P 500 has traded lower since September 30th, and by far the biggest decliner has been Moderna (MRNA).  Although it has fallen a dramatic 41% in a short span, that eats into what have been very strong gains this year.  Even after its decline so far in Q4, MRNA has still more than doubled year to date. The only other biggest decliners since September that are still up year to date are Garmin (GRMN), Allstate (ALL), Carnival (CCL), and Dish Network (DISH).  Click here to view Bespoke’s premium membership options. 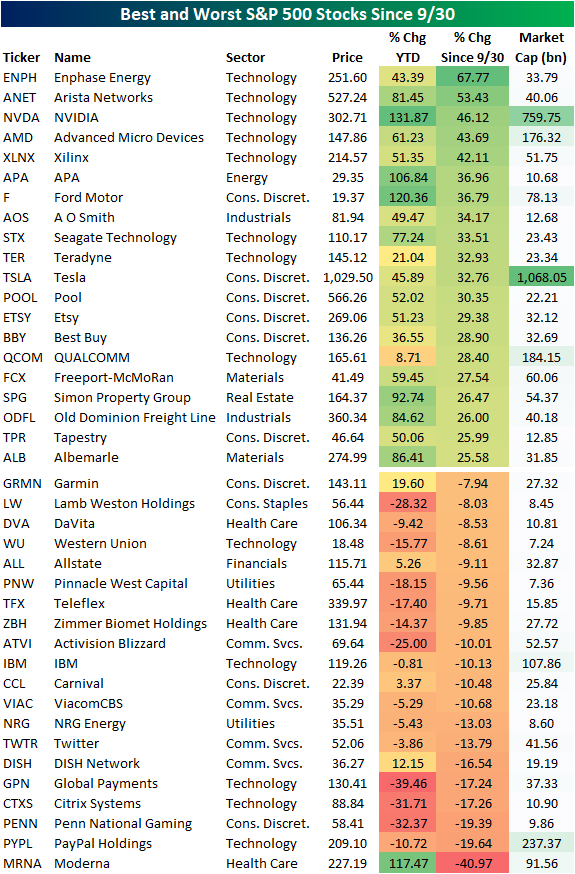