Best and Worst Russell 1000 Stocks So Far in June

Right at the midpoint of June, Biogen (BIIB) has been the top-performing Russell 1,000 stock month to date.  BIIB has rallied 48.08% thanks to a huge move higher earlier in the month when the company received the first approval from the FDA for their Alzheimer’s treatment. With only a couple of weeks since that massive move higher, the stock has pulled back from its highs but remains extremely extended above its 50-DMA.  Looking across the other top 20 best-performing stocks in the index, BIIB is far from being the only Health Care stock.  In fact, most of the best performers so far in June come from the Health Care, Tech, or Energy sectors.  Additionally, many of these other stocks have also soared well above their 50-day moving averages, although there are a couple of exceptions.

One of those is the second-best performer in the index: Iovance (IOVA).  IOVA is another Health Care stock that has experienced huge swings on news surrounding regulatory concerns.  In May, the FDA requested additional potency data from the company which was followed by an announcement that the CEO would be stepping down.  That sent the stock collapsing almost 40% on May 19th.  After a bit of sideways movement through the second half of May and into June, IOVA has nearly recovered those losses, but that still leaves the stock well below its 50-DMA and nearly cut in half YTD. Fastly (FLSY) and Rocket Cos (RKT), and NRG Energy (NRG) are the only other best performers that are also either below or within single-digit percentage points of their 50-DMAs even after the huge gains this month.

Looking at the other end of the performance spectrum, the 20 worst-performing stocks in the index, there are 11 that have fallen double digits in June. The worst of these is Upstart (UPST) which has fallen 17%. This month’s decline has brought UPST right back down to its 50-DMA whereas most of the other worst-performing stocks have fallen much further below their 50-DMAs. Granted, UPST is also the top-performing Russell 1,000 stock year to date having rallied over 200%, and it is up even more, 441.51%, since its first day of trading in mid-December.  Most of the other worst performers are also still up on the year, but not nearly to the same extent.  Click here to view Bespoke’s premium membership options. 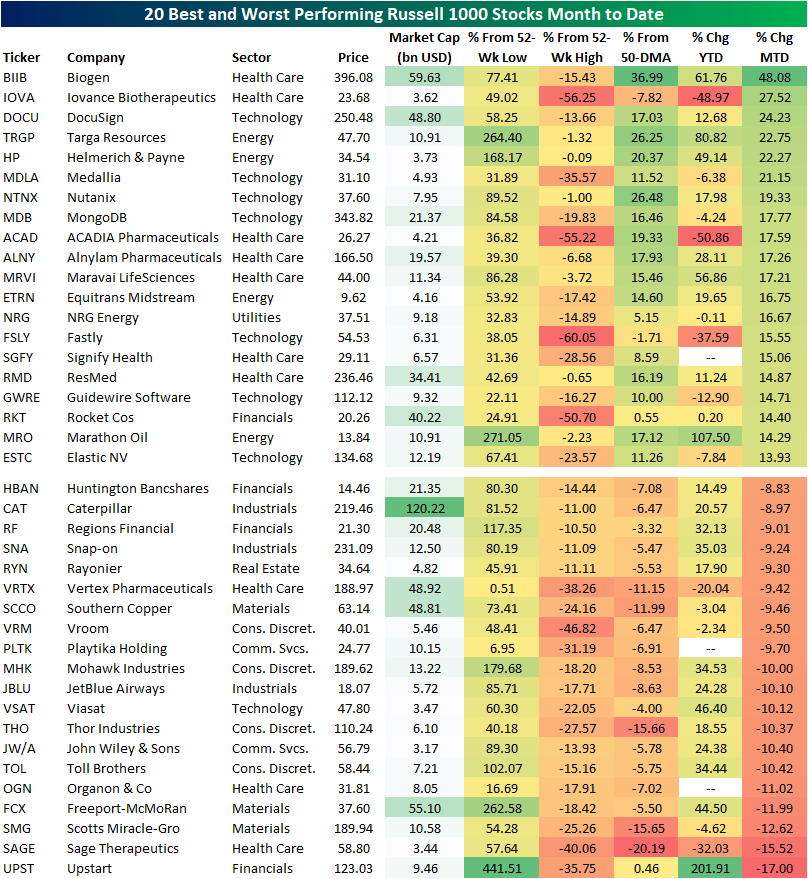