The S&P 500 is down a little more than 12% since the close on March 16th after Fed Chair Powell hiked rates off the zero bound for the first time of this cycle.  We’ve seen 300 basis points of hikes so far, and today we’re set for another hike of 75 bps.

Looking at the S&P 1500, which includes large-caps, mid-caps, and small-caps, the average stock in the index is down 7.1% since the close on March 16th after the first rate hike.  As shown below, Real Estate stocks (REITs) have been hit the hardest by the rate hikes with the average stock in the sector down 20.6%.  Communication Services stocks are down the second most with an average decline of 18.4%.  Consumer Discretionary stocks have averaged a decline of 13.1% since 3/16, while Technology stocks are down 10.6%.  On the upside, we’ve seen two sectors average gains since the Powell rate hike cycle began: Energy and Consumer Staples.  Consumer Staples stocks are up an average of 5.6%, while Energy stocks have averaged a huge gain of 24.8%. Click here to learn more about Bespoke’s premium stock market research service. 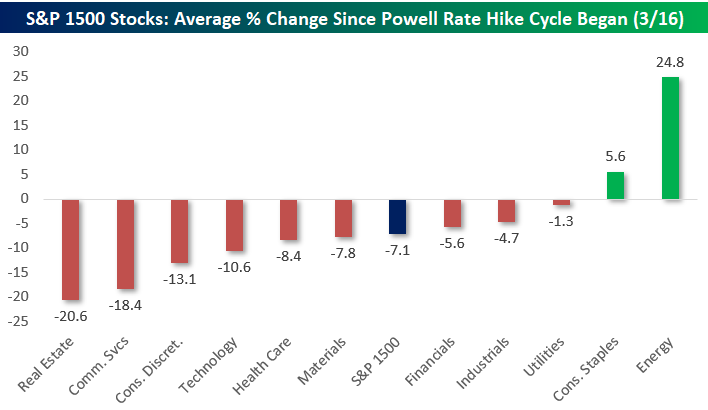 Below is a list of the stocks in the S&P 1500 with market caps above $2 billion that have done the best since rate hikes began back in March.  PBF Energy (PBF) is up the most with a gain of 135.99%, while CONSOL Energy (CEIX) ranks second with a gain of 114.49%.  Other notable stocks on the list of big winners include First Solar (FSLR), Constellation Energy (CEG), Shockwave Medical (SWAV), Enphase Energy (ENPH), Lamb Weston (LW), H&R Block (HRB), TreeHouse Foods (THS), Exxon Mobil (XOM), and Albemarle (ALB). 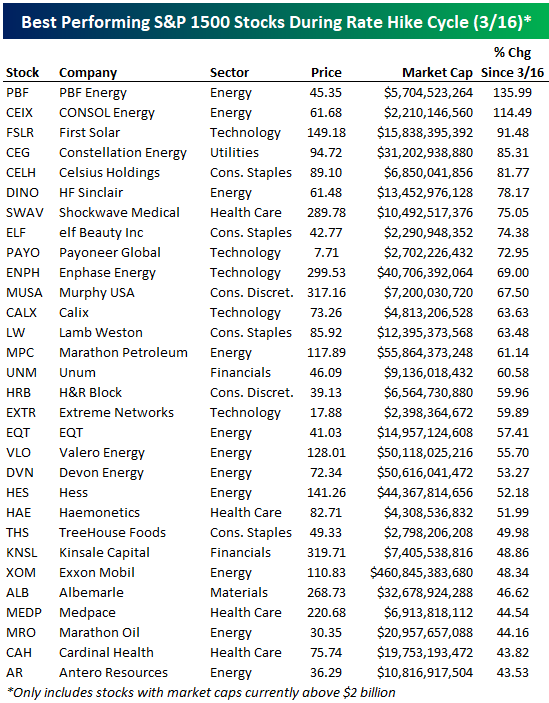 On the flip side, below is a list of the stocks with market caps still above $2 billion that have fallen the most since the rate hike cycle began.  Leading the list is portable generator maker Generac (GNRC) with a decline of 62.45%, followed by two more stocks down more than 60%: Scotts Miracle-Gro (SMG) and Neogen (NEOG).  Other notables on the list of rate-hike losers include Under Armour (UAA), Align Tech (ALGN), Meta Platforms (META), Carnival (CCL), Kohl’s (KSS), Expedia (EXPE), Cleveland-Cliffs (CLF), VF Corp (VFC), AMD, Paramount (PARA), and Yeti (YETI).  Click here to learn more about Bespoke’s premium stock market research service. 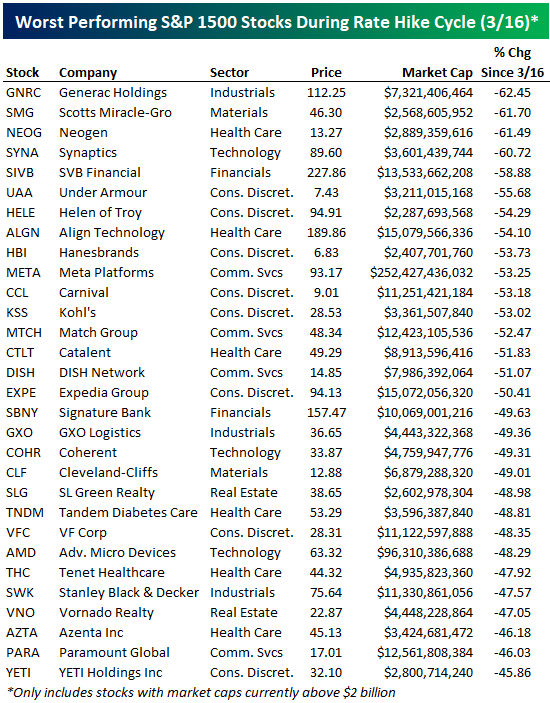