Best and Worst Performers Since Thanksgiving

Although the Russell 1000 is now pretty much right back in line with its pre-Thanksgiving level, certain stocks have seen dramatic moves during that same span. Of the 25 stocks that have experienced the largest gains since 11/25, 19 were down on the year leading up to Thanksgiving, and the average stock had declined by 20.0%. Since then, those 25 stocks have gained an average of 13.1%, with Smartsheet (SMAR) and Chegg (CHGG) leading the group with gains of 22.2% and 20.4%, respectively. 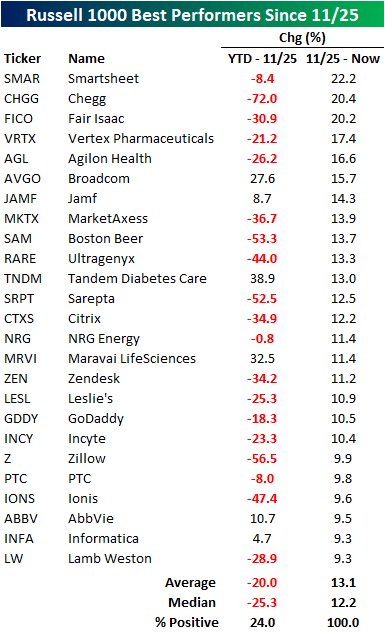 Of the Russell 1000 members that have performed the worst since Thanksgiving, their average YTD performance leading up to Thanksgiving was a gain of 85.7% while the median performance was much less but still an impressive +25.6%. Of these 25 stocks, 18 were positive YTD through Thanksgiving, and the average decline since then is 23.6%. Everbridge (EVBG) and DocuSign (DOCU) topped this list with declines of 37.2% and 36.6% since Thanksgiving, respectively. 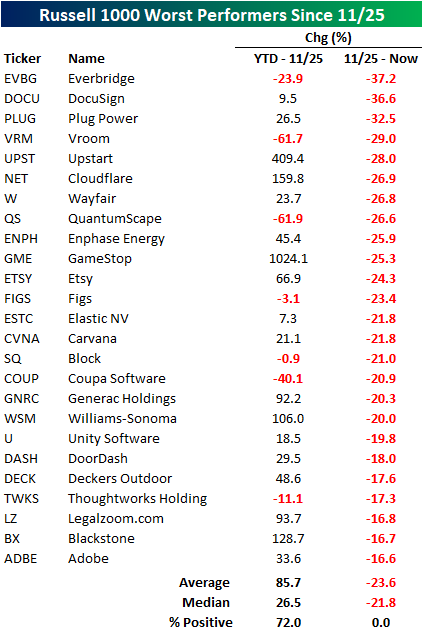 Based on the data above, it appears as if there was some rotation in the Russell 1000 as investors shifted from leaders to laggards. Essentially, the worse a stock performed between the start of the year and Thanksgiving, the better it has performed since, at least for the top 25 movers to the upside. For the 25 stocks that have declined the most since Thanksgiving, there seems to be very little correlation between the size of the move to the upside before Thanksgiving and performance since then. In the charts below, GameStop (GME) Upstart (UPST) were omitted from the chart but included in the R squared calculation due to visual distortion. Click here to view Bespoke’s premium membership options. 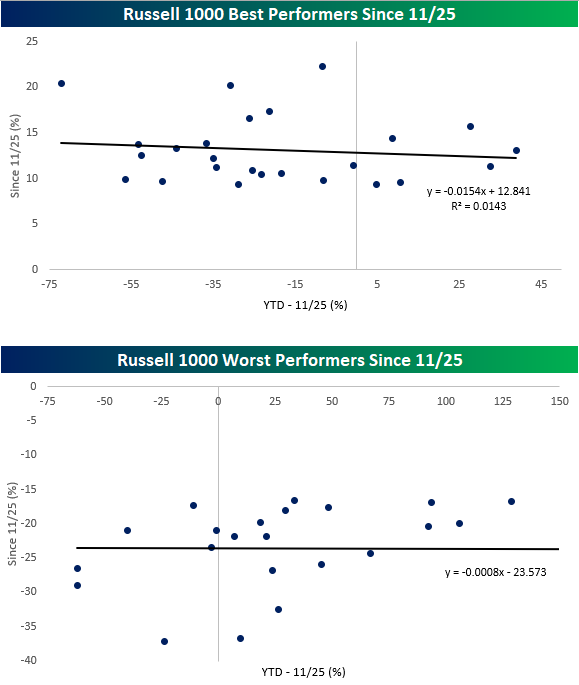