Bespoke co-founder Paul Hickey appeared on CNBC’s Closing Bell on Tuesday to discuss a number of topics including the massive run in Tesla (TSLA).  To view the segment, please click on the image below.

The chart below was highlighted in the segment, and it shows Tesla’s performance since its IPO in June 2010. In the chart, each label on the y-axis indicates a doubling of Tesla’s share price.  What’s pretty amazing about the ten years that Tesla has been public is that the vast majority of its gains have been confined to two separate six-month windows – the six-month period from April through September 2013 and the last six months.  In fact, keeping all things equal, if you were to back out out TSLA’s performance in these two periods, instead of trading just under $1,400 per share right now, Tesla would be under $90 per share.  Talk about a lot happening in a little bit of time!  Like what you see?  Click here to start a two-week free trial for full access to all of our research and market commentary. 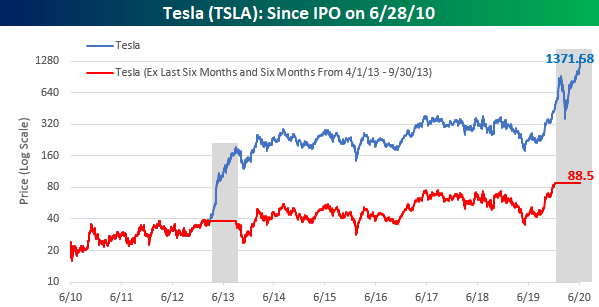