Additionally, every Friday we publish our Bespoke Report newsletter — a detailed PDF that is easily digestible but super informative.  You can see Bespoke’s current thoughts on global markets and the economy in this report.

If you’re not yet a Bespoke subscriber, you can gain access by simply starting a two-week trial to any of the three Bespoke membership levels listed below.  You can revisit our membership options here.

Below is a look at a handful of charts published in our most recent Bespoke Report that we thought were interesting or noteworthy.  Receive charts and analysis like this in your inbox daily by signing up for a two-week trial to Bespoke Premium.

Last week, market performance was mixed, as the S&P 500 and Nasdaq finished the week higher while the Dow and Russell 2000 declined over the week. On Thursday, the S&P 500 finished the trading day at a record high for the 66th time this year, which is a pace that is now the second highest in the post-World War II era. We have now passed 1964 in terms of the number of closing all time highs, and are second only to 1995, in which 77 record highs were recorded at the close. At our current pace, this year would finish with 75, so the fight for first place will likely come down to the wire.

Over the last year, the breadth of the market has been strong as well, at least in the large-cap space.  The cumulative advance/decline line, which we use to measure underlying market breadth, did turn negative after the market set new highs at the close on Thursday, but broadly speaking breadth has been strong.  In the Russell 2000, the spread between the index’s performance and its cumulative advance/decline line is much larger.  After tracking closely in the first half of the year, the spread has increased in the second half of the year.  Last week, every trading day saw more decliners than advancers for the members of the Russell 2000, resulting in the worst weekly breadth reading since early September. 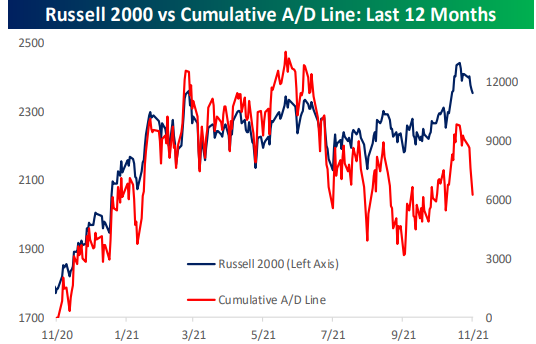 Although US equity market performance has been strong over the last decade, the rest of the world has generally lagged. This is not a new trend, and indices tracking both the world ex US and emerging markets did not reach new highs since 2007 until this year. Both of these indices are now back below their 2007 peak, which is quite intriguing. Should the indices break out above these levels, interest in international stocks may increase meaningfully. 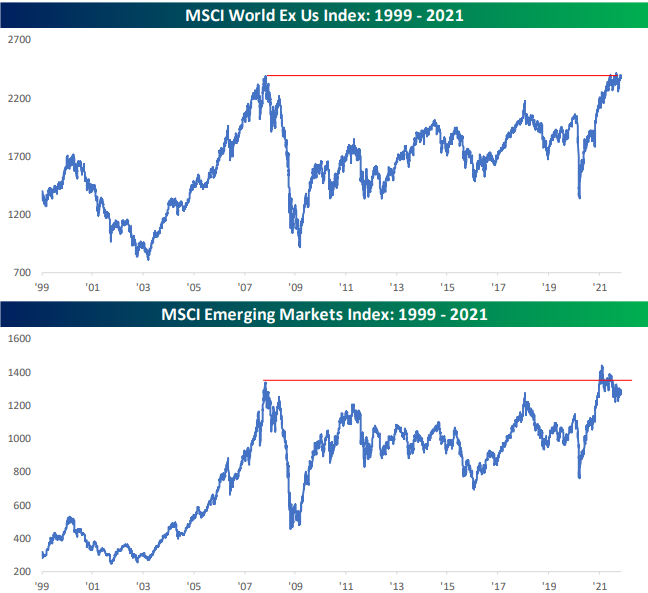 Encouragingly, the ratio of leading indicators to coincidence indicators has continued to rise, which makes the event of a recession unlikely at the moment. As shown below, since 1960, this ratio has peaked before a recession, which is yet to occur since the COVID correction. Even though housing data has been showing signs of slowing, the broader economy remains on a firm footing. 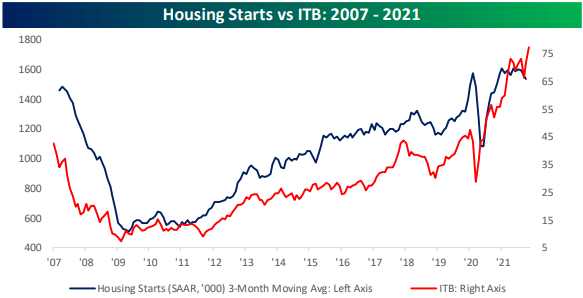 From the COVID low in April 2020, retail sales have risen over 55%, making new highs only five months after the COVID crash began. Since the all-time high reading seen in early 2020, retail sales are up over 21%. After this reading crashed in 2008, it took 40 months to make new highs.  The charts shown in this post are only a handful of the dozens included in our weekly Bespoke Report that include much more detailed analysis for subscribers to review.  You can receive reports like this in your inbox daily by signing up for a two-week trial to Bespoke Premium.  Give it a try now! 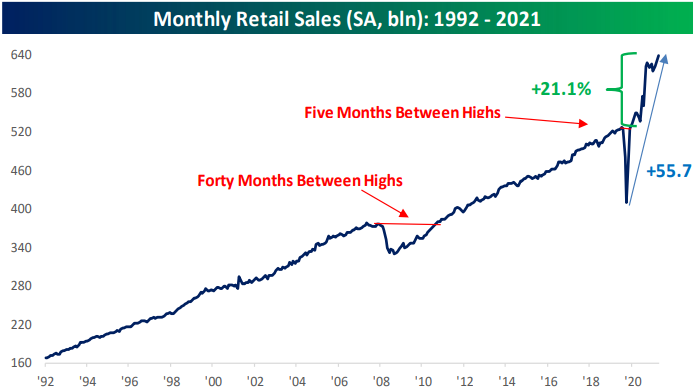