The Oracle of Omaha is known for weathering storms and emerging stronger after market pullbacks. In March of last year, we highlighted the fact that Buffett’s portfolio was seeing declines in line with the broader market, and the legendary investor seemed just as hurt as other market participants. Even though Buffett’s strategy of “be greedy only when others are fearful” has historically been a successful one, he did not aggressively buy the COVID-related dip, and the company now has record amounts of cash stockpiled on its balance sheet.

Although Berkshire Hathaway (BRK/B) has almost $150 billion in cash, the company’s portfolio has still performed strongly. Below is a look at Berkshire’s 20 largest equity holdings as of today based on reported holdings at the end of Q3.  (This doesn’t take into account changes that may have occurred since the end of Q3 since Berkshire doesn’t have to report holdings again until early 2022.)  Berkshire’s position in Apple (AAPL) has swelled to nearly 50% after the stock’s 28.5% gain so far this quarter!  Berkshire’s next largest holding all the way down at 13.3% is Bank of America (BAC), which is up 3.4% QTD.  American Express (AXP) and Coca-Cola (KO) rank 3rd and 4th with weightings of 7.5% and 6.9%, respectively.  Only a handful of other companies have weightings above 1%: Kraft Heinz (KHC), Moody’s (MCO), Verizon (VZ), US Bancorp (USB), DaVita (DVA), Bank of NY Mellon (BK), General Motors (GM), and Chevron (CVX). 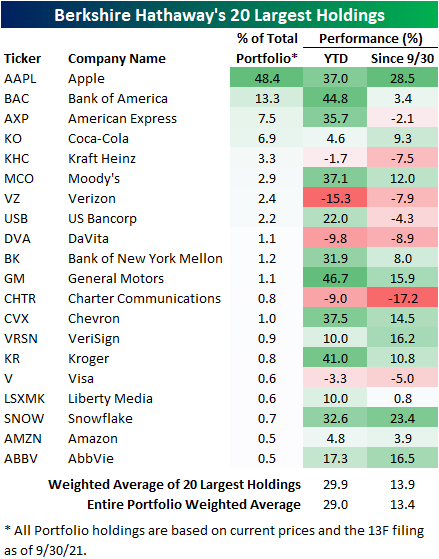 AAPL now makes up almost half of the overall Berkshire equity portfolio (and a quarter of the company’s market cap), which means that Berkshire Hathaway should be correlated to the performance of AAPL. Although the two equities have a semi-strong relationship over the last year with a correlation coefficient of 0.46, the correlation in Q4 has dramatically decreased. Since 9/30, the correlation coefficient is only 0.12, which implies only a very small correlation. Whereas AAPL has traded over 28.5% higher in Q4, BRK/B has only appreciated by about 6.5%. While AAPL shareholders have been rewarded so far in Q4, the stock of one of AAPL’s largest holders has lagged the S&P 500. Click here to view Bespoke’s premium membership options. 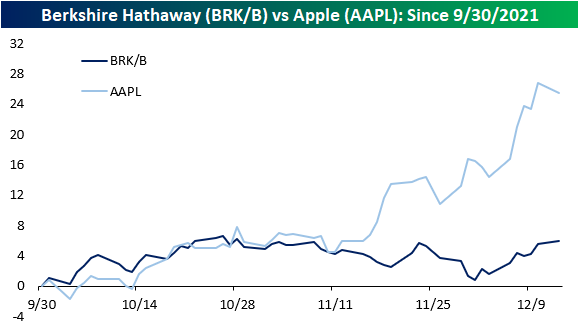